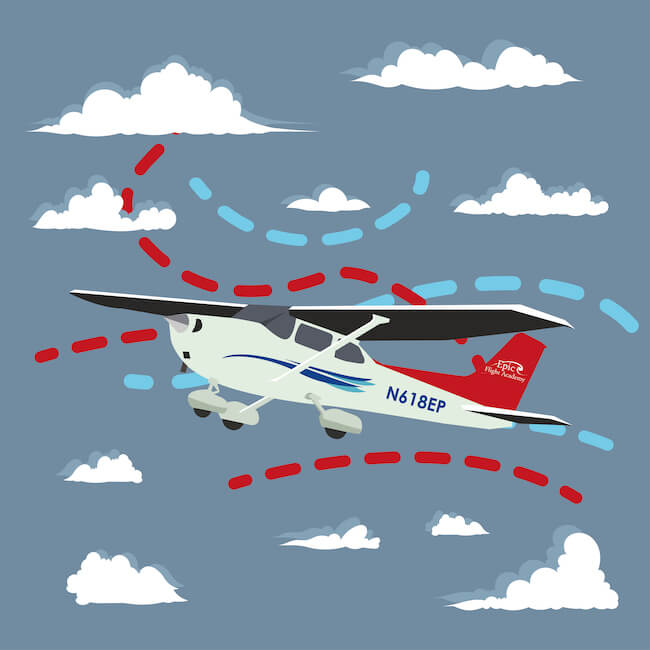 Pilots experience different types of turbulence during flight. Understanding turbulence can help you better respond when you face this situation.

Captain Judy’s Corner: What is turbulence?

What is the definition of turbulence?

Flight turbulence is something most passengers hate. What is turbulence? The definition of turbulence is a sudden, violent shift in airflow. It creates up and down currents caused by irregular atmospheric motion.

We were in the clouds, Instrument Meteorological Conditions (IMC), and flying in an area without radar coverage. My first officer (FO) was busy programming the Citation jet’s system with the latitude and longitude coordinates instructed by Bangladesh controllers. I focused on leveling the Citation at FL390 (39,000’). Suddenly the FO pointed upward exclaiming, “Oh my!”

I looked up in the direction he had been pointing right into the belly of an Airbus. The mammoth jet was so close that we could see the rivets on the underside of the plane. Immediately, our Crew Resource Management (CRM) training went into action, anticipating what was likely next: wake turbulence. Knowing turbulence could cause structural damage, I slowed the jet below maneuvering speed. The FO monitored gauges with verbal callouts, “Airspeed 116, crosschecked.”

The relief pilot had been napping in the cabin when the turbulence hit. Within moments, he was in the cockpit. While trying to keep his footing he shouted, “What the heck?!” He understood the situation quickly enough. The next few minutes seemed like hours while the turbulence forced our small jet into anything but upright. Once the Citation passed through the Airbus’s vortices, the remainder of our flight to Hanoi was uneventful.

On that particular day, I had been holding short while a large cargo jet was cleared for departure. The jet was departing with a light quarterly tailwind on the cross runway. The air traffic controller cleared me for departure as the large jet cleared the runway. The controller followed with, “Caution: wake turbulence.” I knew about wake turbulence avoidance and knew the hazards. I followed the proper procedures as practiced during my initial training and as published in the Aeronautical Information Manual (AIM) Chapter 7, section 3. I recalled the least favorable conditions are a heavy, clean aircraft with a light quarterly tailwind.

The opportunity to climb did not present itself. Less than 500’ above the runway, the vortices pushed my Grumman down. Already at full power, the best I could do was keep the wings level and fly the airplane. I learned a critical lesson from this experience regarding the least favorable wind conditions and to factor in cross runways.

What happens during turbulence?

Student pilots learn that air is a fluid. Air can be measured and has weight. Turbulence is caused when an airplane flies through waves of air that are irregular or violent, which cause the aircraft to bounce around yawing, pitching, or rolling. You can compare turbulence to two oceans meeting. Both oceans have large waves and currents that, as they collide, create even larger waves and currents.

What are the different types of turbulence?

What are the effects of turbulence?

When an aircraft experiences turbulence, the plane can drop or change altitude suddenly. This is why pilots always caution passengers to buckle up and stay seated when they are experiencing flight turbulence. The sudden movements put passengers at risk.

How can pilots avoid turbulence?

Understanding the causes of turbulence is one of the best methods for avoiding it. Because there are different types of turbulence, knowledge is critical. You can avoid inadvertently entering turbulence through training and practice as you become a knowledgeable pilot. You can anticipate turbulence and be prepared to respond by understanding how and where turbulence forms and the procedures for your aircraft. Like all seasoned pilots, I can testify to the power of turbulence!