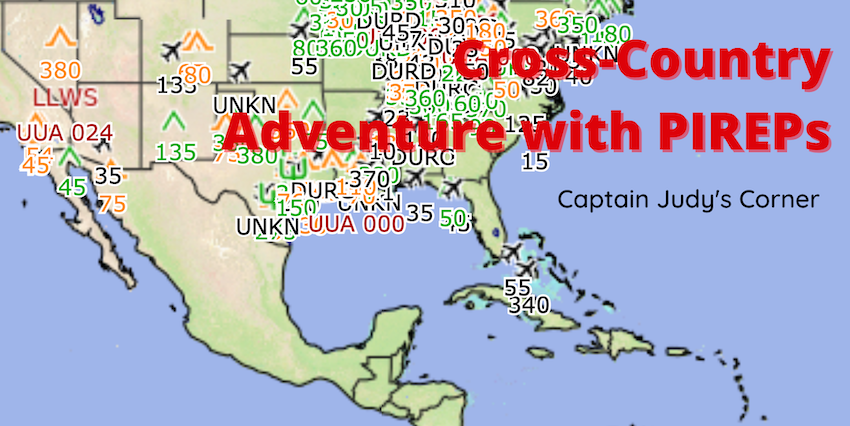 Sunrise brings the promise of perfect flying weather! Today is a satisfying day to apply your knowledge to practice with the long solo cross-country. Therefore, your private pilot check ride prep will follow.

A call to 800-WX-BRIEF Flight Service Station (FSS) briefer verified the VFR online forecasts. He concluded the report with, “There are no PIREPs reported at this time. Pilot reports are appreciated.”

Along your route, check points are within minutes of estimated calculations. Actual fuel burn estimates are exact. You notice a few cumuli in the distance, but the weather forecast did not include a hint of precipitation.

Ten nautical miles from the destination, airport visibility and ground speed are declining and calculations show an increase in fuel burn. There are small amounts of updrafts and downdrafts.

Not to worry! The weather forecast this morning had the cold front well to the west of the route. You ask yourself, “What would my instructor do if sitting next to me?” She’d likely advise a radio call to the nearest FSS. So, you make the call. The radio call to FS provides an updated weather synopsis, as well as PIREPs

What is a PIREP?

A PIREP, or Pilot Report, is a description of observed, actual weather conditions in a given area as reported by a pilot. PIREPs are not required or mandated by any agency. In other words, they are a professional courtesy provided by pilots to others flying in the vicinity. They promote awareness and safety.

Why are PIREPs important weather information for a pilot?

How to report a PIREP

To report a PIREP, on the radio, the pilot calls the nearest ATC facility, FSS, or Air Route Traffic Control Center (ARTCC). Sometimes a pilot is unable to report from the air. Therefore, the FAA provides an alternative once on the ground with the online PIREP submission tool.

Reporting in plain English is welcomed, but knowing and understanding the definitions and phraseology will make for a better and more accurate report. As a result, the flight briefer will format the pilot’s report before dispersing it to other pilots and ATC facilities.

What does a PIREP report include?

A pilot should report any observed weather phenomena considered to be hazardous, potentially hazardous, or aside from the forecasts. There are five elements to include in a PIREP.

What is a Routine UA and Urgent UUA?

Routine UA PIREPs are inflight conditions that do not include potentially urgent information. For example:

Decoding a PIREP is similar to other weather phraseology. Practice decoding PIREPs online. With your mouse, left click the airplane icon in your area. Decode the phraseology using the guide provided. Also, the FAA publishes a quick reference decode guide and PIREP checklist in the back of the Chart Supplement. Practice makes perfect. Most importantly, this information promotes safety.

Nearing your destination, the radio call to the FSS briefer indicates the cold front advancing much sooner than the departure forecasts. The most current PIREPs at the destination reported visibilities less than 3 miles and moderate turbulence. Therefore, you decide to land at the next airport allowing for the cold front to pass. Great decision!

Cross-countries are a gratifying portion of your private pilot training. Pilots know forecasts are not always correct, therefore PIREPs are critical to the safety of flight. Ask your flight instructor if you’ve not already reported or utilized PIREPs. Your passengers will thank you.