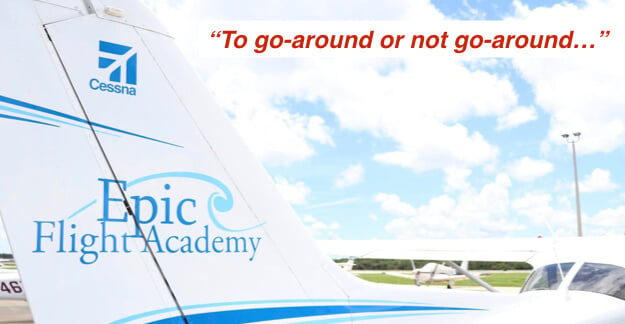 Captain Judy’s Corner: Go-Arounds? That is the question!

A good, safe landing begins before entering the airport environment with continued evaluation throughout the entire phase of landing.

What are some examples of go-around situations?

One go-around I recall, after having completed the appropriate landing checklists and while on a stabilized approach, was when a sudden gust of wind lifted my airplane into the air over the runway threshold. This destabilized my approach so the decision was clear: go-around!

I also remember vividly enjoying an early morning flight, and a flock of birds flew directly in my path on final approach. I had to change my fight path, so a go-around was necessary. On another occasion, foreign object debris (FOD) blew onto the runway, and air traffic control requested that I go-around. Wildlife, which includes turtles and alligators in Florida, are a hazard on or near the runway, and their appearance sometimes requires a go-around.

What exactly is a go-around?

The term “go-around” is used for all types and size of aircraft. This term is universal and recognized all over the world.

A go-around is not an emergency and may be necessary for a number of reasons. There are many unsatisfactory landing conditions. and a go-around might be necessary. These include: unstable approach, unable to land in the touchdown zone, not in correct configuration, directed by air traffic control, obstacle on the runway, or aircraft controllability issues. These examples are reasons to discontinue a landing approach and make another approach under more favorable conditions.

A go-around is not the result of insufficient experience or skill on landing an airplane. This is a misconception. The truth is, the go-around is a maneuver to discontinue an approach for better, safer landing conditions, and it is used by expert pilots every day.

How do pilots know when to execute a go-around?

The Go-Around Decision-Making and Execution Project from Flight Safety reported the average go-around percentages are1 to 2 go-arounds for every 1,000 approaches. The lack of the go-around decision is the leading risk factor in approach and landing accidents, and the primary cause of runway incursions during landing. Fewer than 5% of all unstable approaches result in the execution of a go-around for a safer approach.

Like any maneuver, you should practice and perfect go-around must be practiced and perfected. Flight instructors emphasize the go-around maneuver as an alternative to an unsafe or unstable approach or landing. They do this early on in a student pilot’s training. Although the need to discontinue a landing may arise at any point in the landing process, the most critical go-around is one started when very close to the ground. Recognizing early unfavorable landing conditions will increase the effectiveness of the go-around.

The go-around maneuver is not dangerous in itself. A go-around becomes dangerous only when delayed or performed improperly. Reasons for most go-around delays include:

The improper procedure for the go-around maneuver is lack of familiarity with the three cardinal principles: power, attitude, and configuration.

Do pilots need to notify ATC of a go-around?

You must contact ATC as soon as practical when initiating a go-around. Oftentimes, ATC will contact the pilot first with instructions to either safely remain in the traffic pattern, or depart the area until further guidance.

Both seasoned and new pilots should regularly practice go-arounds with a flight instructor. If you stay current with this maneuver, you will be safer. When the invisible hand of the wind seems to reach out and grab the airplane, safely go-around!