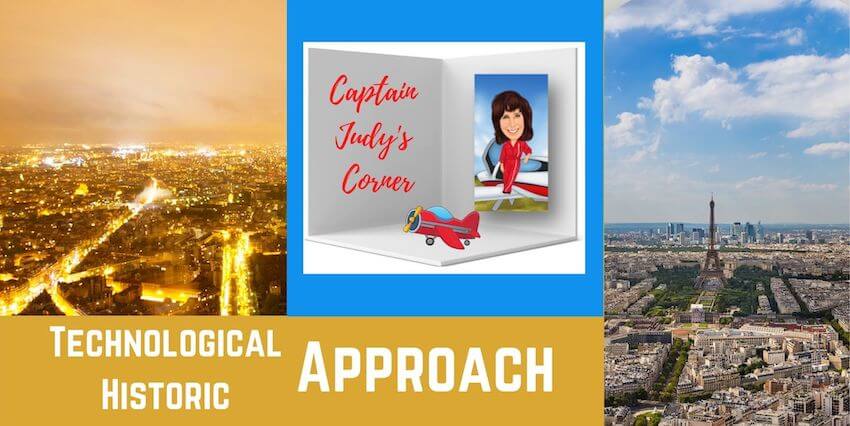 Looking from the Citation jet cockpit, Charles de Gaulle international airport (CDG) was off our right wingtip. The city of Paris was off our left wing. La Bourget airport (LFPB) was directly ahead. The stunning view took our breath away. We anticipated stepping back in time as we approached this famous airport. La Bourget conjured up images of 1927 with a lanky, tasseled-haired Charles Lindberg climbing down from his gray monoplane having just completed his historic nonstop flight from New York City to Paris. We were about to make a technological historic approach.

As we approached LFPB, we could have been on any instrument landing system (ILS) in the world with exceptions based on terrain. De Gaulle approach control stated in a pleasing French accent, “Citation N178SF, cleared ILS runway 25, contact La Bourget tower on 118.92.”  This worldwide instrument approach consistency exists through the efforts of the International Civil Aviation Organization (ICAO). In 1941, the United Nations formed ICAO. As result, pilots and air traffic controllers enjoy worldwide standardization. Similarly, as technology changes the way we fly, ICAO continues to provide standardization that includes up to date instrument approaches. This also impacts security clearance.

There are numerous types of approaches for landings. Student pilots begin with visual approaches by using ground references. Pilots must be able to operate aircraft with visual reference to the ground and visually avoid obstructions and other aircraft. Also, keeping a clear head is instrumental to safety. For example, if you’re wondering how many accidents occur during this phase of flight, you may be surprised. Nearly half of all commercial jet accidents occur on final, so this is an important part of flight training.

Student pilots also learn how to read approach charts and plates to receive clearance. A general definition for an approach is “the phase of flight when a flight crew begins its descent to land and ends as the aircraft crosses the runway threshold.” Pilots take safety measures during every phase of approach. During the landing process, passengers feel the plane reduce altitude, or step down. The plane then powers ahead followed by another step down. This is a common landing procedure. Aircraft flight manuals recommend correct speeds. Of course, these vary between heavy jumbo jets and light aircraft.

Most importantly, if the weather is less than visual flight rules (VFR) prescribe, pilots must use instrument flight rules (IFR). In other words, pilots operate aircraft by referencing the instruments rather than visual reference. As a result, IFR operations require specific training and certification of the pilot. Also, the aircraft is required have increased equipment requirements and certification. Above all, pilots must file an IFR flight plan.

Non-Precision Approaches (NPA) are standard instrument approach procedures with only lateral guidance from the localizer signal. Vertical guidance is not provided. There are 8 types:

Localizer Performance (LP) approaches are non-precision approaches with WAAS lateral guidance. Vertical guidance to the runway is not provided. Furthermore, the LP approaches are located where terrain or obstructions do not allow a vertically guided procedure. In order to conduct an LP approach, the aircraft must be equipped with the appropriate Wide Area Augmentation System (WAAS) GPS receiver.

Very-High Frequency Omnidirectional Range (VOR) approaches use a ground-based signal transmitting an omni-directional radial. VOR signals are line of sight due to terrain blocking. Also, the VOR radials have a range limit, depending on the type of VOR ground device. The U.S. has been decommissioning many VORs. However, pilots must retain skills on flying a VOR approach, because many countries still use VOR.

Non-Directional Beacon (NDB) approach is a ground-based, low frequency radio transmitter. The NDB transmits an omni-directional signal received by an Automatic Direction Finder instrument onboard the aircraft. NDBs are being phased out of air navigation in the U.S. with a few remaining. Although there are fewer NDB approaches worldwide than VORs, pilots should maintain their NDB approach skills.

Localizer (LOC) approaches utilize only the localizer equipment of the instrument landing system (ILS) and not vertical guidance to the runway. Aircraft must be equipped with a navigation receiver. ILS and localizer signals share the same ground-based equipment.

Approach Surveillance Radar (ASR) approaches are similar to the PAR. However, they don’t provide vertical guidance. As a result, when conducting an ASR approach, ATC guides the pilot laterally giving heading assignments or corrections.

Localizer Type Directional Approach (LDA) is used where the approach is offset from the runway 6-12 degrees. The LDA uses the ground-based transmitter from an ILS but not a complete ILS signal. In order to fly the LDA approach, the aircraft must be equipped with a navigation receiver.

Simplified Directional Facility (SDF) approaches are similar to the ILS localizer. Aircraft must be equipped with a navigation receiver to fly this approach. Above all, the course may not be aligned with the runway and may be wider. As a result, there may be less precision.

I have flown VFR and IFR approaches all over the world. A few of my more memorable experiences were flying a C172 in Spain, a Yak in England, the Mooney throughout Asia and the Middle East, and the Citation jet around the world. Regardless of the countries, the approaches were standardized, providing greater safety through consistency.

Enjoy the rewarding process of learning the skills for flying instrument approaches and maintaining those skills. As a result, you’ll fly confidently anywhere in the world!

What were some of your memorable approaches? Please share below… I’d love to hear from you!