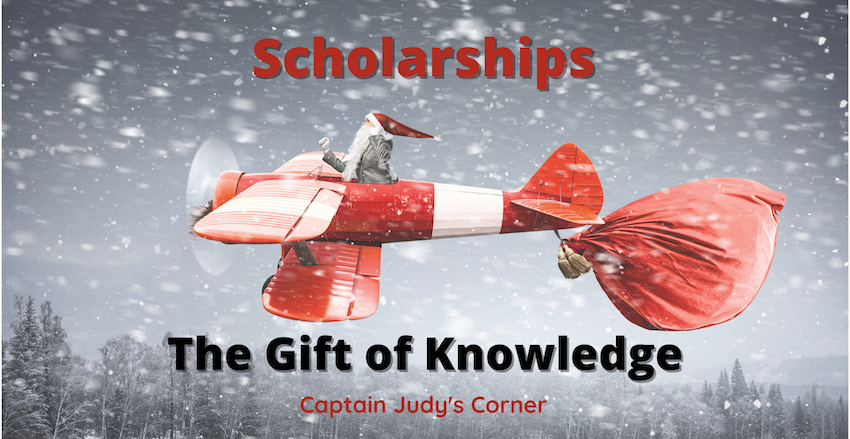 On Saturday, November 6, Epic celebrated its 6th annual Aviation Scholarship Awards and Fishing Tournament. Each year, Epic awards scholarships to deserving high school students. The fishing tournament is a fun event for industry partners that generates funds for future scholarships. The scholarship awards ceremony is combined with a career fair.

2021 Scholarship Recipients – The Gift of Knowledge

Abduldayam Maflahi received Epic Flight Academy’s $20,000 Flight Training Scholarship. When Abdul was thirteen years old, he emigrated from the Yemen mountains with his family to the United States. Life was simple in the mountains. His afternoons were dedicated to tending seven sheep. Often, his eyes would turn to the skies watching the airplanes fly overhead “filling the sky with noise.” He’d wonder how something that big could float in the air. Fondly, Abdul vividly recalled his toy airplane with blue stripes and cool wheels. He’d hold it up to the sky as the airplanes flew overhead. Abdul dreamt about one day flying a real plane.

Once in America, Abdul’s mother explained that it was the law that he had to go to school. On his first day of 7th grade, he sat in a math class, unable to speak or understand English. Everything in America moved from left to right rather than right to left, like Arabic. Not being able to put two words together in English, he found math was the easiest to understand. His teachers would ask what he wanted to be in the future. He knew the word “fly,” which translated to “pilot” by Google.

Abdul currently attends Homewood High School in Alabama. He is a major in the Air Force Junior ROTC and serves on the executive council of Patriot Pride. He is a member of the National Honor Society and recipient of numerous awards for his leadership and volunteer work. As an Epic scholarship recipient, he will strive to be an example with motivation and a true passion. He expressed that the Epic Flight Academy scholarship will take him a step closer to his dream.

“Love what you do and do what you love” is his philosophy. Abdul added, “My dream and my faith are what helped me unfold my wings and learn to fly.” Abdul plans to inspire others making the world a better place.

Luke earned the rank of Eagle Scout and is a PADI certified scuba diver. He is a member of the track, field, and cross-country teams. He is also a member of the National Honor Society. Luke volunteers for numerous environmental projects. He has also participated in the Army Educational Outreach Program through the Army Corps of Engineers developing an Aeroponics system to be used by deployed soldiers in the desert.

Luke is passionate about flying airplanes and drones. He greatly enjoys the technology of both designing and building drones in his closet. This is not the typical high school student closet, but one that resembles a technician’s dream toolbox. Luke’s closet includes a steel upright tool box and a 3D printer. He recently built a CNC Router using his 3D printer. In fact, a condominium community hired Luke to fly one of his drones overhead capturing images for potential roof damage.

Among many of his personal attributes are motivation, positive attitude, teamwork, reveling in learning opportunities, and the determination and passion to fly. Luke’s eyes shine brightly as he recalls the feeling of freedom during flight. His training goals are to graduate from high school with an instrument rating and on his way to completing the commercial before arriving at Epic. He plans to continue onto college while earning his certified flight instructor certificate. His ultimate goal is giving back to other future aviators while continuing to build his knowledge base.

Julie Juedes received a $20,000 Aircraft Mechanic Training Scholarship to support her future goals. She said, “I knew after my tour of Epic Flight Academy this is where I wanted to earn my mechanic certification!”

Julia became interested in flying several summers ago after an Experimental Aircraft Association (EAA) introductory Young Eagles flight and has been interested in aviation ever since. She wanted to learn more about flight training, experience flying, and receive further exposure to aviation. She heard about the Civil Air Patrol, an auxiliary of the Air Force, and joined a local squadron. This is when she decided to begin flight training.

Julia’s parents encouraged her to continue pursuing aviation through multiple setbacks during the flight training. She understood learning how airplanes work will make her a safer pilot. Therefore, she decided to pursue a mechanic certificate. She searched for options and discovered Epic Flight Academy. Although almost 1400 miles from home, her parents scheduled a tour. When the Epic recruiter showed Julia the expansive, well-constructed, Epic campus with welcoming and smiling students, she knew this was the positive environment she’d been seeking for her mechanic certification. Her parents appreciated the well-maintained aircraft and clean facilities. Julia especially appreciated acceptance regardless of diversity as she noticed many cultures all learning together.

Julia is currently working on her Private Pilot solo cross-country flight as she continues flight training in her area. She plans to complete flight training after earning her mechanic certification. Currently, she attends Winneconne High School in Wisconsin. Julia is an active participant in the Book Club and Creative Writing Club. She has accumulated 500 +volunteer hours. Additionally, she earned the right to be on the high honor roll of the National Honor Society (NHS). Her favorite sport is varsity golf. Of all her academic classes, she most enjoys Forensic Science and a Small Engine. She enjoys public speaking for scholarship fundraising events, especially for the Wayne Juedes Scholarship Foundation named after her grandfather.

Her future includes an Aerospace and Forensic Science degree to help her reach the career goal as a Federal Aviation Administration (FAA) Aircraft Accident Investigator.

Tyler Vischer received a $20,000 Aircraft Mechanic Training Scholarship. He lives in a prime location to watch commercial arrivals and departures from Daytona Beach International airport and the formation flights over the Spruce Creek Private Airport. He has been interested in airplanes as long as he remembers. Tyler drew airplanes during class time with his eyes directed overhead. His father recalls that when Tyler was in 6th grade, he preferred to go to the airport to watch airplanes instead of playing baseball with friends.

Tyler would always ask, “How does this work?” especially about airplanes. What determined his career choice was the hands-on experiences while volunteering during summer breaks at a local maintenance facility.  Tyler gained invaluable exposure to restoration, repair, maintenance, and avionics. He recalls a few highlights. “I knew how much pleasure I received from working with my hands when I changed oil and removed and then installed spark plugs. After assisting with restoring a Cessna 152, there was no doubt this was the career for me!”

Tyler jumped at the opportunity when Atlantic High School offered an academy on aeronautics called TESA. This program focuses on technology, engineering, science and aeronautics. He participated on the Student Astronaut Challenge as part of the mission control crew, simulating and solving design or engineer challenges. Tyler also found it exciting joining the Frankendrone team, building drones from salvaged materials. He beams when sharing that his team won the competition during his sophomore year.

Tyler is no stranger to Epic Flight Academy. He volunteers during airplane washes and parking cars for scholarship fundraising events. He selflessly gave back, unaware one day he would be a recipient of his volunteerism.

Epic awarded its quarterly $1000Colonel Anthony Perna Safety Excellence Award to Epic staff member Ray Altmann. Ray trained at Epic and holds the rank of CFII. Ray received the award for his quick thinking and calm. While preparing with his student for an upcoming flight, Ray noticed the weather was deteriorating in New Smyrna Beach (KEVB). Upon hearing a solo student returning to KEVB expressing concerns on the UNICOM, Ray used a hand-held radio to assist the student with aeronautical decision-making. The student chose to safely divert to another airport.

Yes, Santa came early for Epic Flight Academy’s students and staff! We are blessed with a great team and celebrate our impressive students! And if you’re looking for other gifts for pilots, we can always make recommendations.