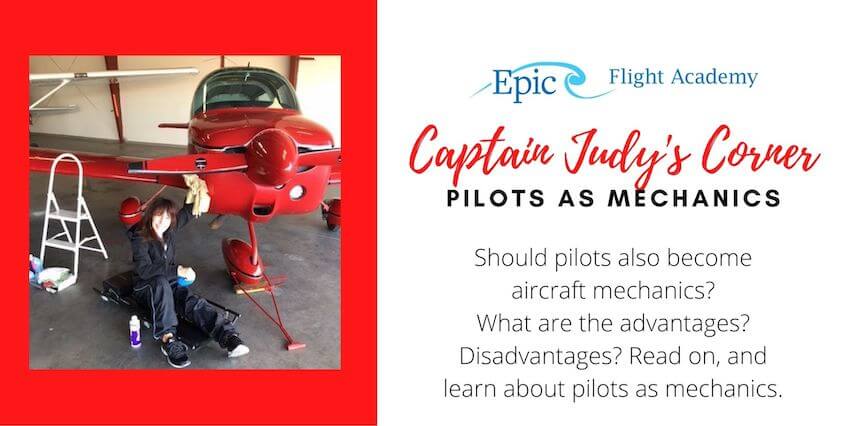 Should You Become Both?

Becoming an aircraft mechanic is a rewarding career. So is becoming a pilot. So, why would anyone go to the trouble of becoming both? After all, you’ll likely choose one or the other for a career. There are many good reasons why people choose to train in both fields. For example, a professional pilot who has become trained as an aircraft mechanic is more likely to notice if something seems ‘off’ during flight. This is a safety issue. Just as an auto mechanic would notice a problem while driving, an A&P would notice a problem with flying. Likewise, a professional mechanic who is also a pilot knows exactly how the controls should feel or how the engine should sound. The knowledge in both fields is reciprocal, which has always been important to me. In fact, I vividly recall my first aviation toolkit, which I still use when I work on my Grumman (pictured above).

Why are people drawn to pilot and mechanic careers?

I could not have imagined all my worldly experiences as a middle school special education specialist 30+ years ago. I had always dreamt of flying was was firmly told that “girls do not fly.” I was also told that girls do not get greasy or dirty. Finally, at the age of 40, I found the courage to earn my wings. However, it was not until I learned about aircraft systems that I gained an appreciation for getting greasy. Now, at 68 years old, I enjoy getting greasy while working on my airplane. By waiting so long to pursue my dream, I feel that I missed out on years of aviation enjoyment.

Do you enjoy working on cars or turning a wrench around the house? Do you like to tinker around on things that others believe aren’t repairable? Have you wondered what the view looks like from the cockpit of an airplane? Becoming a pilot-aircraft mechanic may be your calling. Pilots who also have earned their airframe and powerplant (A&P) certificate are more marketable. Likewise, A&Ps who know how to fly are in high demand. If you’ve ever wanted to look under the hood of an airplane, you really ought to try it. So, you may want to train as both a pilot and mechanic.

How long does it take to become a pilot?

The requirements are different for domestic (U.S.) and international flight students. However, most student pilots go from zero experience to commercial pilot in about a year. Depending on your career choice, you will have to log hours and meet various minimums to fly for the airlines. Here at Epic we help you navigate your career path. You begin by earning your Private Pilot License. Once you have earned your first set of wings, you’re really ready to take off!

How long does it take to become an aircraft mechanic?

You must complete five courses to earn your A&P. These include general, airframe I, airframe II, powerplant I, and powerplant II. Epic’s aircraft mechanic program requires 18 months to complete. Classes run Monday through Friday, and new classes begin every four months. The advantages to being certified as both a pilot and mechanic are obvious. The only obvious disadvantages would be the time and cost for training.

Who should become both a pilot and mechanic?

People who own aircraft are not required to be either a pilot or a mechanic. However, they likely hold at least a PPL so they can fly their planes. Certainly, becoming an aircraft mechanic is a prudent idea for plane owners, because they can do their own maintenance. Pilots as mechanics can make a lot of sense for a career in aviation or for aircraft owners. In fact, pilots as mechanics can be a requirement for some jobs. For instance, a bush pilot in Alaska or some other remote area may be required to be both as a pilot and an aircraft mechanic. There are no readily available data as to the percentage of pilots who are also mechanics. However, anecdotally, I know quite a few pilots who also trained as mechanics. For example, Epic’s founder Danny Perna became an A&P mechanic and later became a pilot and flight instructor. Also, many Epic pilots hold an A&P, such as Captain Mike Thompson, Epic’s CFI senior instructor. One final thought: should you ever lose your medical, you may be grounded from flying, but not working as an AMT.

So, what’s in my future? As the owner and pilot of a Grumman, the FAA allows me to do certain types of preventative maintenance. Perhaps one of these days I’ll even enroll in Epic’s Part 147 aircraft mechanics program. Maybe I’ll see you there!

Feel free to leave comments and ask questions below. I would especially love to hear from pilots who are also aircraft mechanics!

4 thoughts on “Pilots as Mechanics”