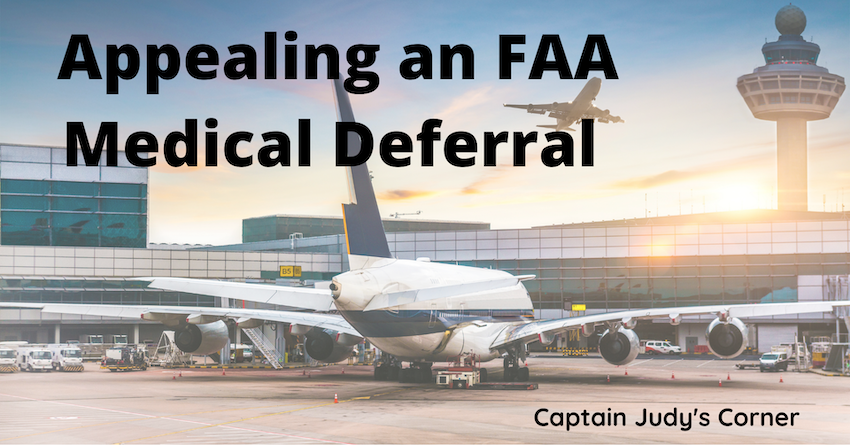 Captain Judy’s Corner: One Flight Student’s Recipe for Success in Dealing with an FAA Medical Deferral

Combine the following ingredients and adjust for best results:

The Dawsons raised their children with their same high standards for work ethic, determination, and professionalism. The children knew only these standards. Bryce shared, “My parents were always patience and supportive. Looking back, I now realize that we matured at a younger age.”

When the brothers were old enough to appreciate family outings, they would go on day adventures. Bryce expressed his fond memories of these adventures, “One of my first memories were a shuttle launch. I thought, how cool is that! Then we attended my first airshow. That was it, I was hooked. I knew this is what I was going to do with my life.”

During school, Bryce did not like math or much of any subject unless about airplanes. Connor liked school and almost all subjects. He excelled. Bryce was said to be inattentive. His teachers would reprimand him stating, “You are not good in math and not teachable.” One day, a frustrated teacher exclaimed, “You will not make a good pilot. You are not good in math, and pilots must be good in math.” Bryce was devastated. He began misbehaving.

Bryce’s family doctor prescribed Vyvanse, a commonly used drug at that time thought to help students focus. Doctors can prescribe either with a proper clinic evaluation or based on teachers’ recommendation. Bryce was not clinically evaluated. His parents were told he had the disorder called Attention Deficit Hyperactive Disorder or ADHD (or ADD). His parents hoped Vyvanse would help their son. At this point, an FAA medical deferral was the last thing on anyone’s mind.

Bryce did not take the drug very long, expressing to his parents, “I am learning and don’t like the way this drug makes me feel.” Paul and Paula believed their son and stopped the drug from being administered. Soon thereafter, Bryce outgrew the misbehaving.

He was a good student throughout high school, and it was time to look toward his future. He discussed flight school choices with his parents. They visited several of his top choices. After their tour of Epic Flight Academy, it was definitely the choice.The first day of Private Pilot ground school couldn’t arrive soon enough.

Students’ first week at Epic involves not only ground school lessons, but completing the paperwork for FAA requirements, security, and more. This Includes the FAA Medical. Students cannot fly the airplane solo unless they have the medical and student pilot certificate in their possession.

“I was shocked and only knew there was an issue when the FAA deferral letter for my medical arrived in the mail. The letter was intimidating, demanding medical history and proof of my mental state. I am healthy, have never had any serious medical issue, and haven’t even had a traffic violation. Now what? I turned to the Epic experts for guidance.”  As a good, honest student pilot applying for the FAA Medical, Bryce had reported having briefly taken Vyvanse. Fortunately, even when denied, a pilot has the right to appeal.

Epic’s team explained he had two options. He could: (a) work through this on his own, contacting doctors, mailing the information to the FAA and responding to the FAA’s further requests; or, (b) pay an Aviation Medical Examiner (AME) with credentials on such matters and with proven FAA medical case successes. Epic recommended Dr. Luchansky.

Dr. Luchansky is one of those experts. He has been specifically trained in evaluating airmen for substance use, alcohol-related conditions, and other mental health conditions. As a Senior AMA and specializes in HIMS psychiatry, he has been designated by the FAA as a Senior Airman Medical Examiner. Dr Luchansky reviewed the letter and told Bryce he has a good chance of success if he has patience, is willing to do the work gathering information, and accepts that further evaluation will be involved. Bryce and his parents agreed.

Patience During the Process

Bryce contacted his prior doctors requesting all past medical records. Further evaluation by an FAA HIMS neuropsychologist involved an all-day exam gathering raw psychological data that would be summarized and reviewed by one of the FAA’s consulting clinicians. This report, along with prior medical records, was mailed to the FAA. Dr. Luchansky warned Bryce to step back and be patient. He further explained that the more a pilot contacts the FAA, the longer it will take for the conclusion. The FAA must filter through all responses.

It was a very long six months before the FAA responded. Bryce would ask Dr. Luchansky if they could inquire or if this indicates a denial. “Be patient,” Dr. Luchansky replied.

Bryce is extremely grateful for Dr. Luchansky’s and Epic Flight Academy’s staff guidance, for his father’s patience, and his mother’s positive support. His dad would say, “Remember that life is the 80/20 rule with 80% how you deal with and overcome, and 20% what actually happens. You are in control of your own life. As soon as you are through this experience, you will rocket through training and onto your career. This is only a moment in life.” His mom was the soothing support and never had any doubt her son will be successful. She’d reassure him saying, “This is going to happen, Bryce!”

When we asked for the successful recipe to work with the FAA, the doctor responded, “Patience is a virtue. With the FAA, it is a necessity.”

A recipe for a master chef is guidance. The chef will mix, stir, adjust for an exquisite taste. So must a pilot. Oftentimes, through guidance, Bryce adjusted his recipe for success. Perhaps he needed to add a little more patience or maybe a pinch of time. On March 3, 2022, he successfully completed his private pilot checkride and began instrument training. As his father had assured him, “As soon as you are through this experience, you will rocket through training and onto your career.”

The recipe has changed for Bryce for each step of training and then onto his career. But the process is the same. Follow the recipe, adjust as required, and you, as well, will have success!