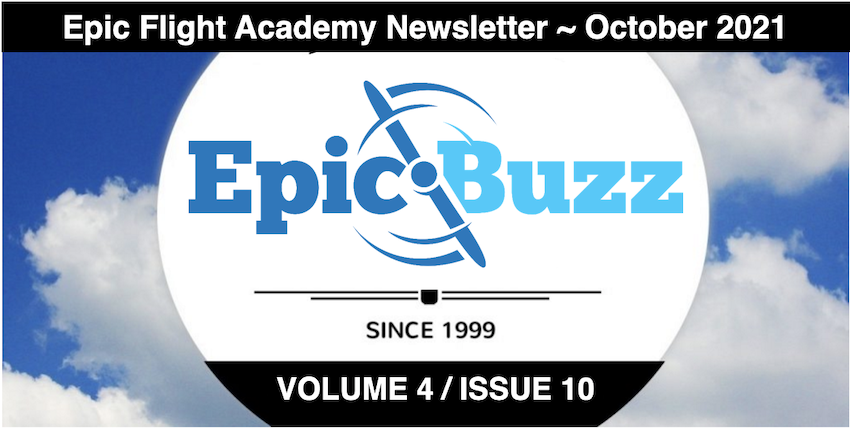 Epic launches Epic Anywhere for flight training at your local airport! Also, staff and alumni news and special savings in October. Volume 4, Issue 10 | October 2021 We Now Offer “Epic Anywhere” Do you live in one of the 48 contiguous United States? If so, we can bring Epic flight instruction to you at your neighborhood airport! Epic now offers flight training delivered to you thanks to Epic Anywhere, our newest flight training initiative. One of our highly qualified flight instructors will fly the training aircraft directly to you. Flight training is offered in two-week blocks to suit your schedule and location.  Endeavor Air Visits Epic We were thrilled to welcome pilot representatives from Endeavor Air for a career seminar … Read more 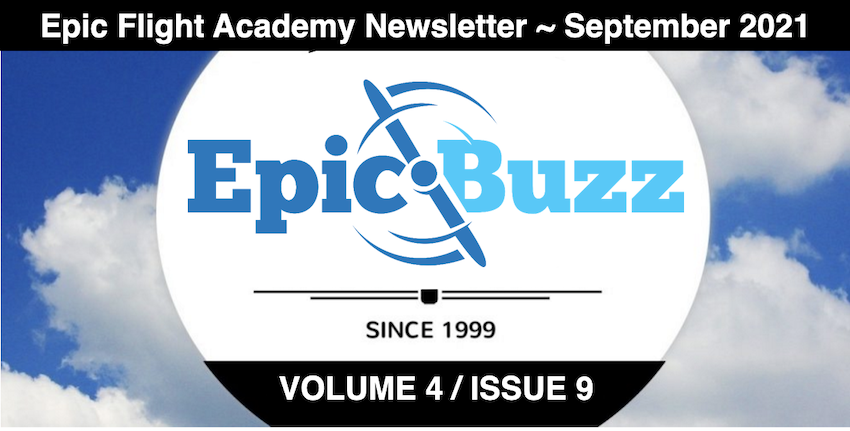 Volume 4, Issue 9 | September 2021 Safety Award Presented Congratulations to our Colonel Anthony Perna Safety Award winner, Andrew Leonard. In honor of Colonel Anthony Perna, this award recognizes an individual whose dedication to safety is truly exceptional. Andrew prioritizes safety in his role as a dispatcher at Epic. Pilots have probably noticed Andrew’s attention to detail when checking weight and balance before every flight. Andrew contributes tremendously to the safety culture by promoting and utilizing our internal safety reporting system. Thank you for your efforts, Andrew! The Colonel Anthony Perna Safety Award is given on a quarterly basis and all departments are eligible. If you know someone that should be recognized, please reach out to a Safety Officer with nominations. … Read more 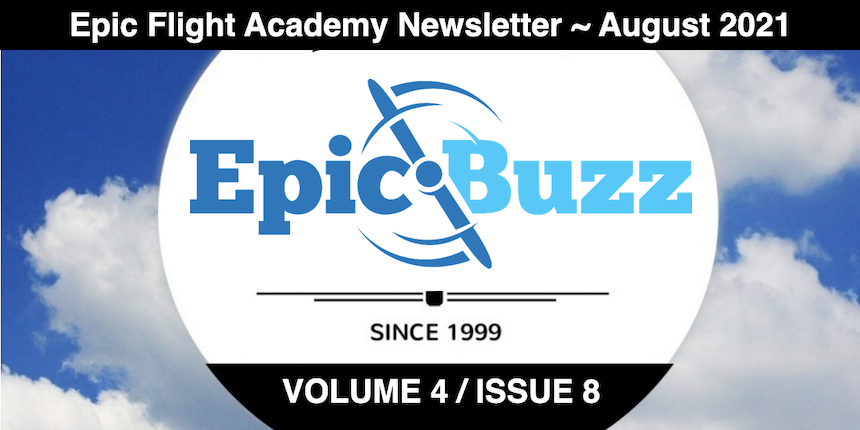 Volume 4, Issue 8 | August 2021 Epic Goes to EAA AirVenture Oshkosh 2021 We were thrilled to be back at EAA AirVenture Oshkosh this year from July 26th through August 1st. There is no aviation event like Oshkosh! We got to meet up with old friends and make new friends. Thanks to everyone who stopped by the Epic Flight Academy booth to say hello! We’ll see you there again next year! August Specials We have some exciting specials that will run Aug. 1, 2021 through Sept. 30, 2021. There has never been a better time to begin your new aviation career training! Domestic Professional Pilot Special: *Free Private Pilot Ground School International Professional Pilot Special: *Free Private Pilot Ground School … Read more 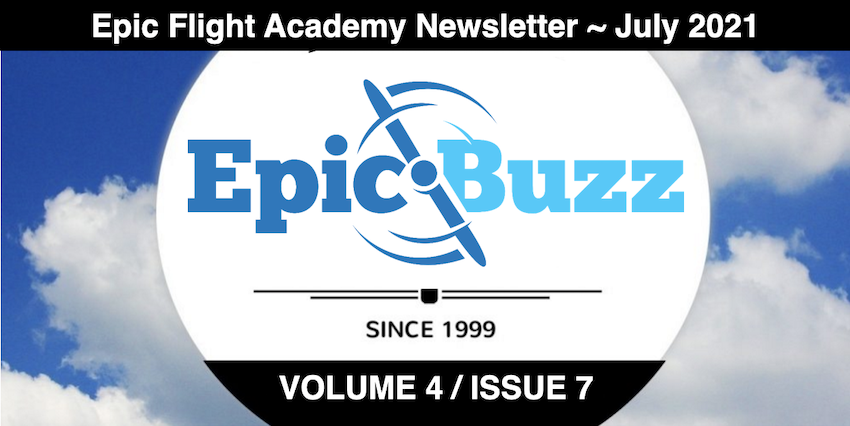 July special for PPL, full-motion sim in the news, alumni updates, online demos, check rides, and more! Volume 4, Issue 7 | July 2021 Simulator Enhances Flight Training Epic Flight Academy worked with Frasca to develop its Private Pilot Course to include full-motion simulator training. The goal was to save students time and money. In fact, Flying Magazine and AOPA recently shared the success of the course. Epic students have also weighed in, including Steve Ramroop: “My experience with the Frasca full-motion simulator has been an excellent one. By properly utilizing this flight training tool, I was able to accomplish my first solo faster and obtain my Private Pilot License within the suggested time and close to the suggested budget. I look … Read more 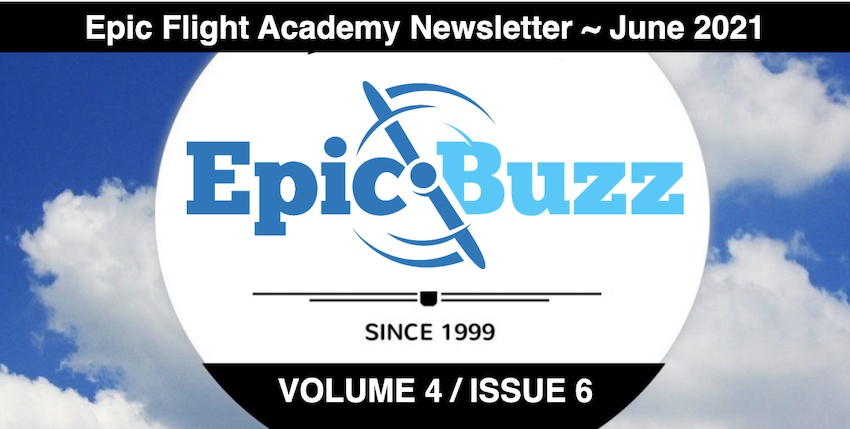 Volume 4, Issue 6 | June 2021 Piper is Our Newest Hiring Partner We are thrilled to welcome Piper Aircraft, Inc. as Epic’s newest hiring partner for our Part 147 aircraft mechanic graduates. Greg Sims (center), Senior Manager of Manufacturing for Piper, visited Epic recently and is pictured here with COO Josh Rawlins (left) and Business Operations Manager Tyren Wilson (right). We invite you to check out our Aircraft Mechanic Program and see if it’s right for you. It’s easy to apply, and our next class begins June 8th. June Specials Airline Direct Program – IR and CPL students are eligible for the Airline Direct Program. (Note: Typically, only PPL students are eligible for this program. Because we have just launched this … Read more 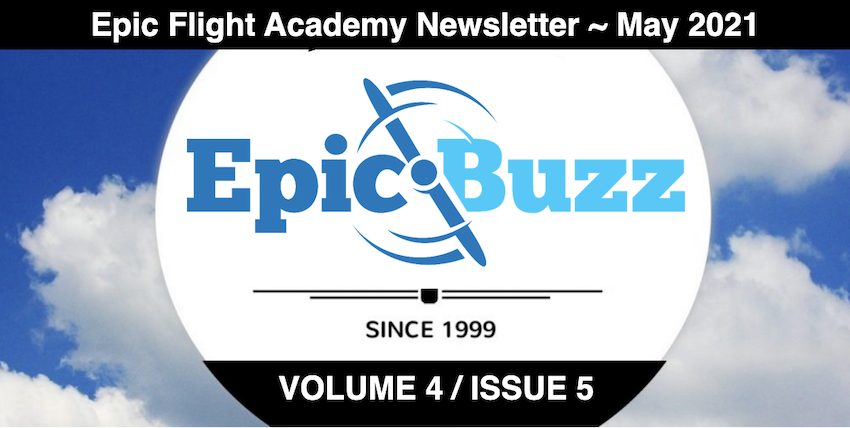 Safety Award Winner Announced Congratulations to our Colonel Anthony Perna Safety Award winner, Manuel Diaz. In remembrance of Colonel Anthony Perna, this award recognizes an individual whose dedication to safety is truly exceptional. Colonel Perna’s 30 years of faithful dedication to military aviation stands as a testament to the difference one person can make. Manuel prioritizes safety in the air and on the ground. Before he meets with a new student, he does his research so he knows who he is flying with. His decisions in the airplane always side with caution, and he reports safety deficiencies, when necessary, that contribute to our safety culture here at Epic. Thank you for your efforts, Manuel! The Colonel Anthony Perna Safety Award … Read more 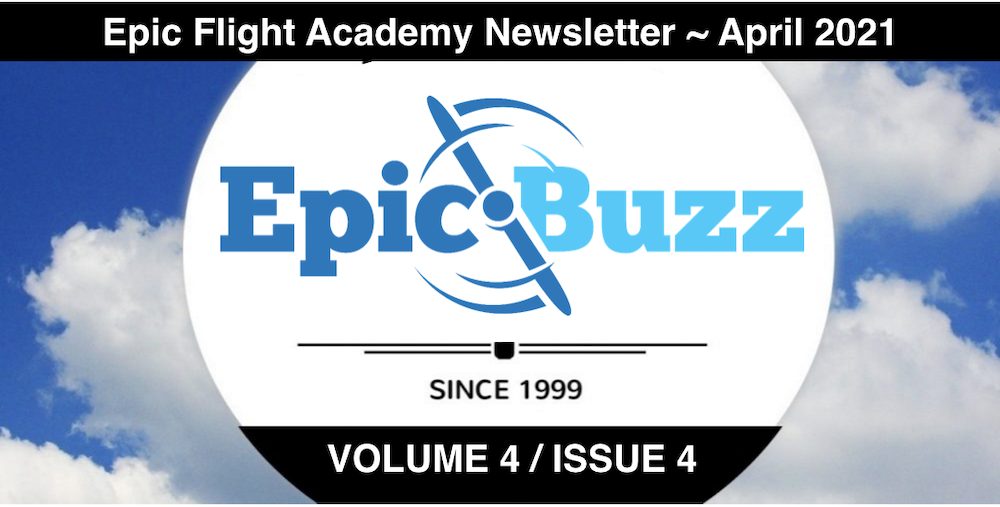 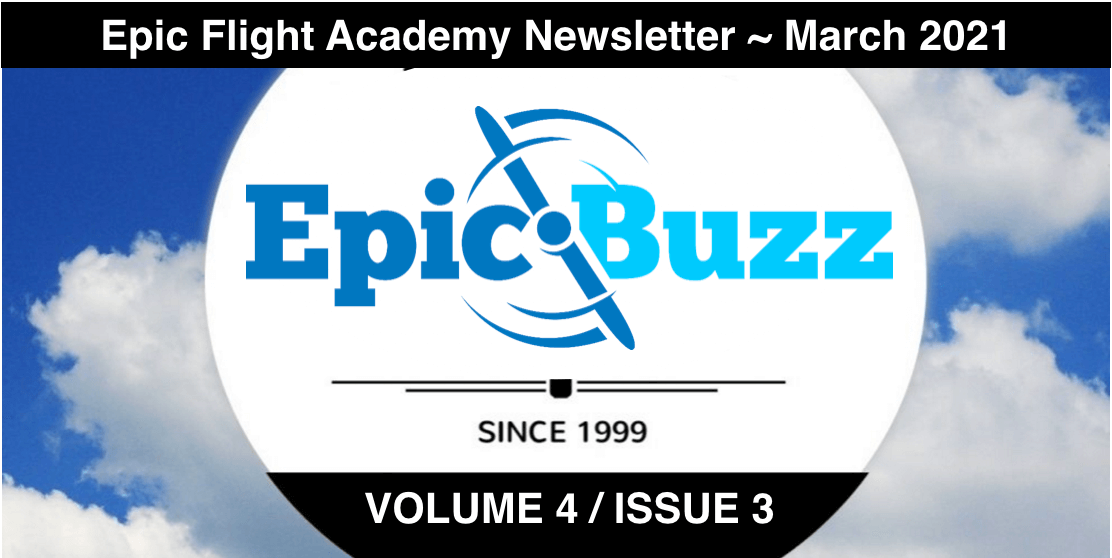 March specials, new aircraft, women in aviation, staff news, checkride passes, and more! Volume 4, Issue 3 | March 2021 Women in Aviation Week Celebrate Women in Aviation Week by participating in the Institute for Women of Aviation Worldwide (IWOAW)’s event on March 8th. A French female pilot, Raymond de Laroche, received her pilot license on March 8, 1910. She is believed to be the world’s first licensed female pilot. Join Epic Flight Academy and aviators from around the world to celebrate Women in Aviation Week. You can even help go for a world record in a display of pink paper airplanes. Epic is proud to have awarded aviation scholarships to Sadie Gerstle (2020), Bronwyn Rees (2019), Skye Sobzack (2017) and Victoria … Read more 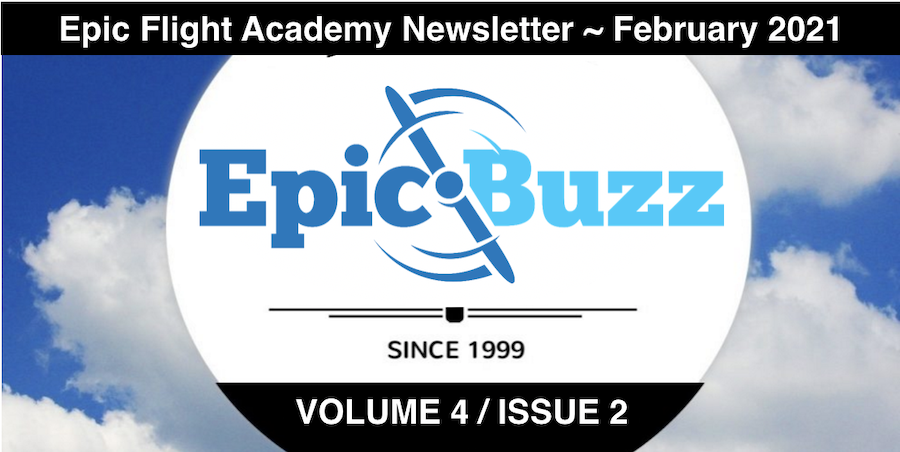 Volume 4, Issue 2 | February 2021 3 New Aircraft Arriving We are excited to announce that Epic will be taking delivery of 3 new Cessna 172 Skyhawks on February 16th. As our fleet continues to grow we are able to increase availability for our flight students to fly around the clock. The Cessna 172 with G1000 cockpits are the #1 flight training aircraft for many reasons. We buy ours brand new directly from the Cessna factory. Safety first! February Specials International Students! Free Private Pilot Ground School for those who pay their application fee in February and arrive before August to begin flight training!   College Students! All flight students with a valid college ID receive 10% off in February and March.  … Read more 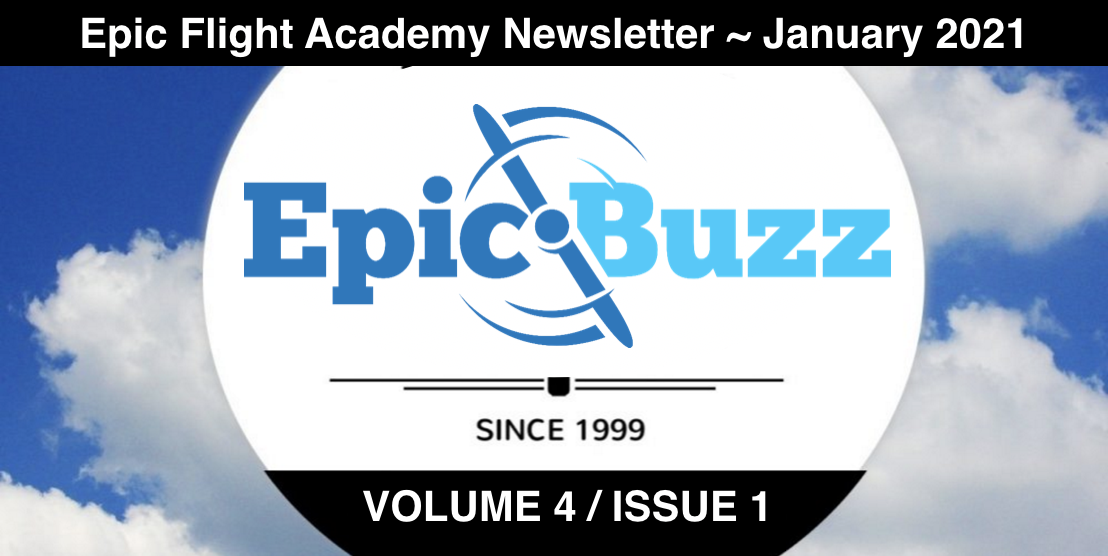 January special for international students, a look back at 2020, Epic graduate updates, staff news, checkride passes, and more! Happy New Year!A Look Back at 2020 The Southeast Volusia Chamber of Commerce hosted a ribbon-cutting ceremony for our new Part 147 aircraft mechanic school on December 16th. This event capped off a year that saw exceptional student achievement and exciting growth at Epic Flight Academy. Early in the year, Epic awarded $100,000 in aircraft mechanic scholarships in anticipation of the program’s launch. Epic also awarded $44,500 in aviation scholarships to high school students during its 5th annual scholarship awards. These were supported by Epic’s annual fishing tournament. Of course, one of our favorite highlights was being the first and only … Read more