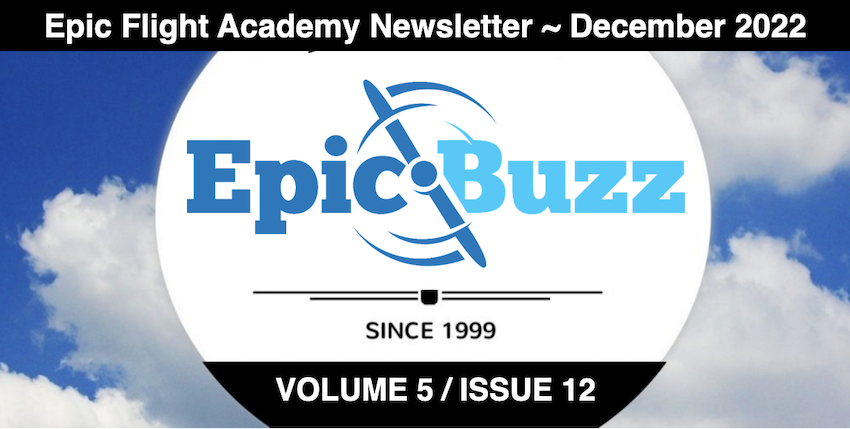 Congratulations to our 2022 aviation scholarship winners! We received dozens of applications from 13 states. Aaron Perez and Ethan Harpending each won $20,000 for aircraft mechanic training; Austin White won $20,000 for flight training; and Landon Bosco and Roland Ireland each won $5,000 for flight training. A special thank you to Piedmont Airlines for funding a $5,000 scholarship this year!

We are so proud to congratulate Holly Ledesma, our first female A&P mechanic who passed her FAA exams and has been hired by Gulfstream Aerospace in Savannah, Georgia! DME Steve Alcorn (right) said, “She knocked it out of the park!”

Way to go, Holly! You were an excellent student and worked hard for this achievement.

Welcome to our new class of Epic pilots. They are from all around the world and are actively flight training. We will keep you updated on their progress as they earn their stripes!

Thank you to these wonderful United Airlines representatives who visited Epic’s Aircraft Mechanic Program last month. Our students learned about hiring opportunities at United as they get ready to graduate and start their careers.

Epic in the News

Did you know that Epic was named the #1 best flight school for international students? Catch up on all the latest news!

International flight students receive a special discount when they enroll with a friend. In December, we are offering our most popular special: “Bring a Friend to Flight School!” Both students will receive a $5,000 credit and free Private Pilot Ground School. International students who enroll with a friend, with both paying their application fees between December 1, 2022 and December 31, 2022, are eligible for this special. You must enroll and begin training no later than March 1, 2023.

Congratulations to Epic graduate Elizabeth Heim from Brazil who is now a First Officer flying the Pilatus PC12 for Azul Brazilian Airlines! Beth was an incredible flight student, and we’re so proud of her accomplishments!

Are you an Epic graduate? If so, send us an update.

Thank you to Epic staff who volunteered to serve a traditional American Thanksgiving dinner to our international students living in Epic student housing.

These flight students passed check rides on their first attempt in November!