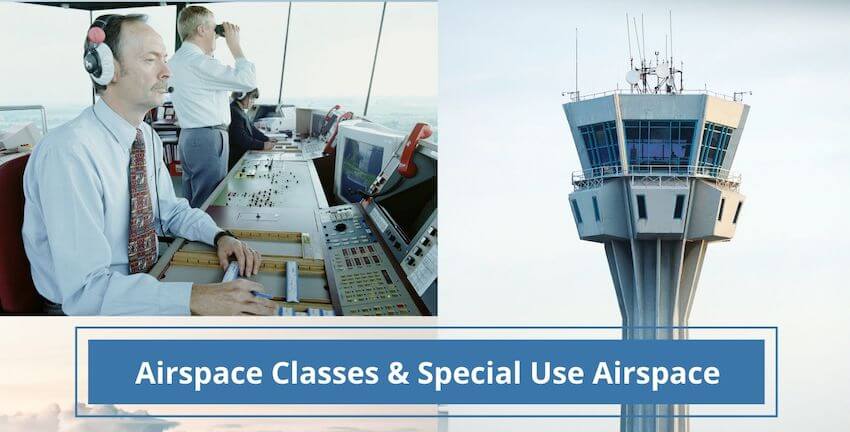 Airspace Classes and Special Use Airspace

Knowledge of airspace classes is essential for all pilots. ICAO standardized these classes with rules and regulations. They include Class A, B, C, D, E, G, and special use airspace. Most importantly, these designations define clearance requirements, minimums, and dimensions. Pilots may need to adjust altitude and speed depending on the section of airspace they’re flying in. Also, ATC may require radio contact or communications. Because airspace categories differ, you must learn how to recognize them on charts. Furthermore, you must understand the detailed requirements of each. Besides, authorities established airspace classes to keep you safe. Above all, safety first!

How I Learned Airspace

Airspace may be one of the most complex and important topics that a pilot needs to understand. Learning airspace can seem overwhelming at first with a lot to remember. How did I tackle learning about airspace? I realized that for each airspace classification there are only 3 topics to remember: dimensions, equipment, and Visual Flight Rules (VFR) weather minimums. I then discovered some of these airspace dimensions have the same VFR weather minimums and equipment requirements.

Student pilots were not always so fortunate to have the Internet or cell phones for studying. Students now use online flash cards to study airspace and other topics. I studied airspace before computers and cell phones. Making my own index cards, I placed the classification on the front. I then put the dimensions, weather minimums, and requirements on the back. I took these flash cards with me everywhere! Waiting in the grocery store line or having car maintenance? No problem – I had my flash cards. I purchased a cassette tape on airspace (today it’d be an MP3), and listened in the car or while doing housework. I focused every spare moment on learning airspace.

Airspace familiarization on the VFR Sectional Chart is equally important. I studied the sectional chart from the top to the bottom naming the classification and information for each airspace. Your airspace knowledge will come from determination, repetition, study, and focus.

In Airspace Part 1, I described airspace issues we faced during my world flight. “We departed from Yerevan, Armenia (UDYZ) in the Citation jet and arrived into Tel Aviv, Israel (LLBG). My pre-flight briefing with the crew included news that, once airborne, we would receive a mandatory security stop. This would occur before being allowed into Israel airspace.”

Not All Airspace is the Same

Certainly, my world flight would have been unlikely without clearly designated airspace. Because of the efforts of the International Civil Aviation Organization (ICAO), flying internationally has become much safer. In 1941, the United Nations formed ICAO, and they established a standard, organized three-dimensional airspace system. This three-dimensional approach includes various rules and regulations. However, some nations chose a two-dimensional approach.

For instance, China chose a two-dimensional approach. In China, each regional authority of the Civil Aviation Administration of China (CAAC) must approve civilian flights. Also, they must get approval by the military before issuing a flight permit. The three-dimensional approach is relevant to air traffic management. For instance, the United States, Europe, and many other nations use this.

A country’s aviation authority or similar authority determines how it uses the ICAO dimensional approach and classifications. For instance, some countries modified airspace classifications. This was because they addressed security, safety, or air traffic services that existed before ICAO standardization. However, most nations chose a version of the ICAO classification, whether using a three-dimensional or two-dimensional approach. ICAO airspace classes are: Class A, Class B, Class C, Class D, Class E, Class F, and Class G.

The most widely modified class is Class F airspace. ICAO designated Class F as either uncontrolled or special use airspace (SUA). Like most countries, the United States established separate SUAs to meet security and safety requirements. Furthermore, SUAs in the U.S. remain mostly unchanged after initial implementation of the ICAO classifications.

Due to safety concerns, the FAA established SUAs in the U.S. As a result, military operations, national security, and heavy flight training activities became safer. Therefore, non-participating aircraft are restricted from flying in these ares. These areas range from prohibited to caution, and this overview of U.S. SUA classifications begins with the most restrictive. Pilots have limited access, and as a result must request the appropriate clearance to enter certain areas. Most importantly, a flight chart (map) displays dimensions of the areas and minimum requirements.

Prohibited Areas are established for national security and welfare. A pilot must request clearance from the controlling agency before entering a Prohibited Area. For example, P-50 protects the U.S. Naval Submarine Base at Kings Bay, Georgia.

Warning Areas are located over domestic or international waters and generally 3 nautical miles surrounding the coasts. Hazardous activities can impact non-participating aircraft. However, no clearance is required to enter. For example, W497B protects airspace during spacecraft operations from Cape Canaveral.

Temporary Flight Restrictions (TFR) temporarily restrict flight activity from operating within a defined area. This protects persons or property in the air or on the ground. The FAA issues TFRs based on the movement of the President or other essential government officials. TFRs can also include disaster relief operations, wildfire response, or large events, and they are issued by NOTAMs.

Air Defense Identification Zones (ADIZ) include monitored airspace. For example, authorities monitor the identification, location, and control of civil aircraft. This is in the interest of national security. Pilots must file under Instrument Flight Rules (IFR) or Defense Visual Flight Rules (DVFR) before entering or departing the U.S. This can be over land or water.

A Wildlife Refuge is specific to land management for wildlife, such as migratory birds. Authorities request that pilots remain 2000’ above ground level (AGL). For example, the Merritt Island National Wildlife Refuge near Cape Canaveral, is a special use area.

A Wildlife Sanctuary is an area established to preserve a species. Authorities require flight activities to remain 1000’ AGL. In other words, do not disturb the wildlife!

Alert Areas contain a high volume of flight activity. However, authorities do not require clearance to enter these areas. So, pilots must remain extra vigilant looking for traffic when in these areas.

Controlled Firing Areas (CFA) are not found on the Sectional Chart, but they are listed in the Chart Supplement Guide. Activities are conducted in a controlled environment that could be hazardous to nonparticipating aircraft. Again, authorities do not require clearance. However, a pilot may contact the controlling agency for the most current hazardous activity.

Learning about and navigating SUAs as a student pilot was vital to the safety of my flight training. Certainly, I consistently relied on this knowledge. It served me well during my world flight, and it serves me today. Most importantly, understanding and experiencing the SUAs in the U.S. provided a solid foundation. This prepared me for my world flight thanks to the standardization efforts by IACO.

What is Class A Airspace?

What is Class B Airspace?

What is Class C Airspace?

What is Class D Airspace?

What is Class E Airspace?

What is Class F Airspace?

What is Class G Airspace?

Due to obvious safety issues, pilots must understand all aspects of airspace classes, and they must comply. Most importantly, ICAO created airspace classes because of safety concerns. Consequently, air travel remains highly respected as a safe mode of travel. Furthermore, special circumstances arise that require temporary adjustments to airspace. When in doubt, find out. Above all, contact ATC if there is any question about your location and your right to be there. As a result, you will always find yourself in the right place at the right time!

Drones, or unmanned aircraft systems (UAM), must adhere to airspace rules, too. For instance, the FAA prohibits flying drones over rescue or emergency operations, such as hurricanes and wildfires. Small drones can only fly up to 400 feet AGL. If you are a drone operator, learn the rules. The FAA legally defines drones as aircraft. Therefore, you are accountable for knowing when and where you can safely fly your drone.