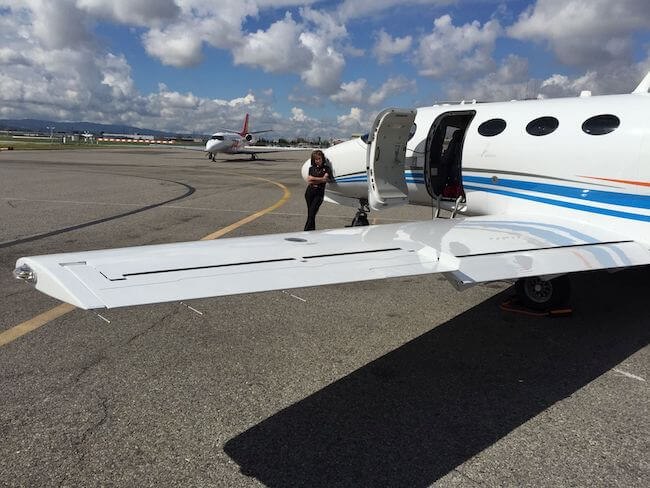 The Need for Speed

Above: Captain Judy Rice stands next to the Citation Mustang in which she broke a world speed record.

Going for a world record!

An aircraft speed record is no small thing.

As the Citation approached Kangerlussuaq, Greenland (BGSF), I queried the Air Traffic Controller about their readiness as officiators for my Federation Aeronautique Internationale (FAI), National Aeronautic Association (NAA) World Record Attempt. The controller responded, “Affirmative.” After landing, two airport officials assured the jet was fueled before giving a friendly wave as I taxied to the runway hold lines. After that, ATC cleared us direct to Reykjavik. In a heavy Danish accent, the air traffic controller remarked, “The clock is ready for your record-breaker, N178SF!”

Kangerlussuaq, Greenland to Reykjavik, Iceland was a total of 727 nautical miles. I leveled the jet at FL290 (29,000 feet) in clearing skies. As planned and reviewed with my crew, I set the cruise power (Vc) for optimum at ninety-five percent instead of maximum speed cruise power at eighty five percent. The First Officer carefully monitored the Engine Indication Systems (EIS) for any discrepancies. Meanwhile, I monitored flight instruments. We were all aware that I was on the clock. Most importantly, I had to beat 2 hours and 30 minutes for a record success.

“We were all aware that I was on the clock. I had to beat 2 hours and 30 minutes for a record success.”

Once on Reykjavik tower, the controllers welcomed us. They reassured us that they were ready as the landing official record-keepers. As we entered the small FBO (Fixed Base Operator), a tall Danish man greeted me excitedly. He shook my hand in premature congratulations. (I say ‘premature’ because the speed would need to be officially acknowledged.) Most importantly, he exclaimed in a Danish accent, “Congratulations, Captain Judy Rice, you record-breaker!” It seemed all of the Reykjavik crew were elated at being part of my FAI, NAA record. It would be months later before knowing if I were officially awarded this record.

How is aircraft speed measured compared to a car?

Regardless of record-setting, cruising in a jet, or a small training aircraft, speed is measured differently compared to a car. For instance, a car’s speed is defined as miles per hour (mph) and an aircraft in mph, knots (kts), or Mach. Likewise, there are different variations on these speeds depending on temperature, wind, and pressure. For example, a pilot reads airspeed right off an instrument called the airspeed indicator. This is known as indicated airspeed (IAS). Calibrated airspeed (CAS) is indicated airspeed corrected for installation errors in either the pitot tube or static port. The errors must be accountable when IAS does not equal CAS.

What is true airspeed?

True airspeed (TAS) is the speed of the aircraft relative to the air it’s flying through. TAS is greatly affected by high altitude and hot temperature. TAS is higher than IAS, because the higher the aircraft flies, fewer air molecules are available for the instrument to efficiently measure speed. Temperature also affects TAS, because warm air molecules rise faster than cold air molecules. For example, on a warm day compared to a cooler day, there are fewer air molecules. A pilot must calculate indicated airspeed according to TAS. The high temperatures significantly decrease takeoff and landing performance for the same reasons as a higher altitude.  The air is less dense in both situations.

The movement of an airplane relative to the ground is called groundspeed (GS). A headwind would cause a slower GS, and a tailwind would cause a faster GS. IAS could read 100 kts, but with a tailwind the GS would be faster. A headwind causes the aircraft to fly slower with an IAS reading 100 kts. A pilot must calculate GS according to winds at the altitude. Otherwise, she could possibly miscalculate fuel requirements.

Mach is a measurement relative to the speed of sound. Mach 1 averages 666 knots or 767mph. Cruising in a small training aircraft at 110 knots averages 128 mph or Mach 0.16.  Commercial jets’ average cruise speeds are about 500 knots, which is 575 mph, or 0.75 Mach. One of the largest passenger jets, the Boeing 777, typically cruises at 560 knots converting to 645 mph, or Mach 0.84. Most jet airspeed indicators automatically change from knots to Mach once reaching a high altitude. For example, the Citation’s Mach conversion altitude was FL300 (30,000 feet).

Student pilots learn the importance of calculating and planning for each type of airspeed. Learning in a slow, training airplane while managing these airspeeds is best. Most importantly, it provides the foundation used throughout their career and vital to the safety of flight.

Do you have a need for speed? Get checked out in the Lockheed SR-71 Blackbird. The Blackbird holds the world record for the fastest air-breathing manned aircraft with a recorded speed of 1,905.81 knots, which is 2,193.2 mph, or 2.8584 Mach. That is a staggering 37 miles per minute!

The Rest of the Story

So, after my exciting flight, I had to wait to find out if I held a world’s record. Eventually, I received the official news. At 350 mph, which is 304.15 knots, or .46 Mach, just under 2:24 minutes , the FAI, NAA awarded me the Speed Over a Recognized Course Record from Kangerlussuaq, Greenland to Reykjavik, Iceland. Certainly, this achievement was a thrill for me. Above all, my focus was safety first, and speed second.

1 thought on “The Need for Speed”