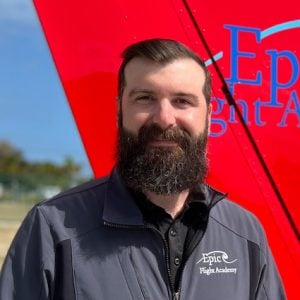 Department(s): Executive
Position: Executive Vice President of Operations
Josh Schwenn is a native Floridian, Josh earned his Bachelor’s degree from the University of Central Florida in 2012 while pursuing his love of aviation. Growing up in an aviation family, he put his hands on the flight controls for the first time at the age of six, thus beginning a passion for the sky, although he didn’t always spend it in the airplane.
An eight-year career in the skydiving industry allowed him to safely log 5,000+ parachute jumps, all while earning his CFI rating. Upon completion of his CFI, Josh began his career with the Epic family in 2014. He served as Director of Flight Operations prior to his current position.