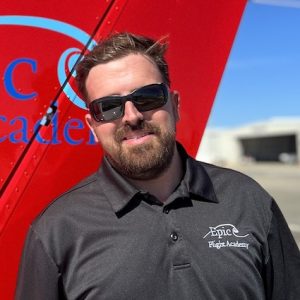 Josh Rawlins was born and raised in New Smyrna Beach, just a few short miles from Epic Flight Academy. In June of 2003, at just 19 years old, he began his job at Epic sweeping hangar floors and doing whatever was needed by his co-workers. Little did he know this would lead him to a lifelong career in aviation.

Over the years Josh took the initiative to educate himself. While working at Epic he took online accounting classes, obtained his license as an A&P mechanic and received his inspection authorization. Through these achievements he quickly progressed into the role of lead mechanic and shortly after became the director of maintenance, all this while starting a family with his wife Jessica.

With Josh’s work ethic, attention to safety and overall commitment to Epic Flight Academy it is easy to see why he gained the title of VP and then in 2015 moved on to his current position as Chief Operating Officer and board member. In February 2022 Josh added Aircraft Mechanic Program Director to his responsibilities. He loves seeing students come in the first day of school with a dream in their eye and leave as a well-trained pilot on a path to a successful career in aviation. Josh prides himself on working as a team player and looks forward to making Epic the premier flight training academy for pilots world-wide.

In 2022, the NBAA presented Josh with the Business Aviation Top 4o Under 40 Award in Maintenance. Josh was a Top ’40 Under 40′ Honoree by the Daytona News-Journal in 2021.