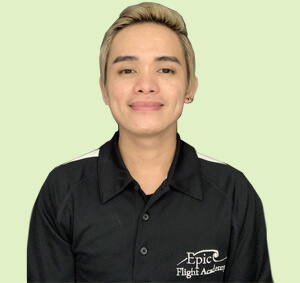 Jayson Abrao was born and raised in Davao City, Philippines. He earned his Bachelor’s degree in Business Administration Major in Financial Management at Surigao del Sur State University and was a Dean’s lister during his time there.

After earning his degree, he began working as an accounting staff for four years in a real estate company. Jayson aimed to work in a government office, so he decided to quit his post and took the civil service examination and was extremely happy when he passed the test after his third attempt in October 2018.

He joined Epic’s Live Chat Support Team in August 2018. He finds it amazing to support aspiring aviation students wherever he is around the globe.

Jayson loves to go with his family or friends to the beautiful beaches in the Philippines. Nature is his stress reliever. His biggest dream is to travel the world.