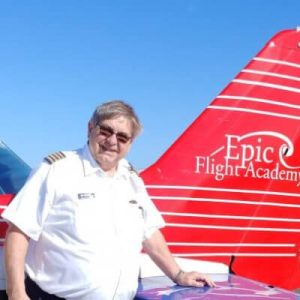 Hal Maskiell earned his Private Pilot License in June of 1967 and proceeded directly to US Navy flight training. After earning his Naval Aviator wings in October 1968, he was assigned as a flight instructor at the Naval Air Station, Whiting Field, FL in the T-28 teaching Transition, Precision and Aerobatic flight. He was next assigned to a transport squadron out of Norfolk, VA flying Grumman C1As point to point ashore and to and from aircraft carriers at sea.  He has 92 carrier arrested landings. Next was a stint scheduling the Navy’s Mediterranean airline from Naples, Italy while still flying the C1A and US2 around Italy and Western Europe. During this time, he also served as president of the Navy Naples Flying Club and instructed in Cessna 150s and Cessna 172. He earned his CFIA, CFII and CFI-M.

After leaving the Navy he pursued a 30 year career in business management and marketing while doing recreational flying.  Missing full time flying, he retired early and reinstated his flight instructor certificates to do some part time flight instruction. Part time became nearly full time and he developed and taught the Private Pilot Ground School course at T&G Flying Club in Cleveland, OH. Tiring of winter weather (and scraping snow and ice off airplanes in the winter), he and his wife, Gail Magnuson, moved to Ponce Inlet in spring of 2014. He soon started working part time at Epic. Part time quickly became full time as Hal loves flying and working with his students from all around the world. In 2017 he earned his single engine sea plane rating and the FAA’s Wright Brothers Master Pilot Award. His current work at Epic is focused on CFI candidates and doing progress checks for all single engine courses.