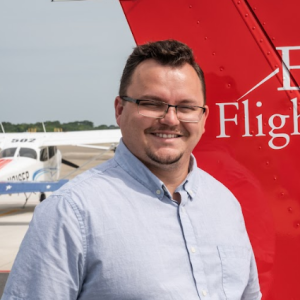 Mike Lopez moved to Palm Coast, Florida from Long Island, New York with his family in 2008. After completing high school, began working on completing his Associates degree at Daytona State College while spending his summers performing across the country with various music ensembles as a trumpet player and percussionist. After attending Daytona State and completing his Associate’s degree, he was accepted to the University of Central Florida and began pursuing a degree in Radio and Television production.

He started working as a freelance video producer with Epic, creating a few videos every so often until he was offered a full-time position as the video production specialist. He loves having the opportunity to film unique students, engaging classroom lessons and dynamic aircraft flying through the Florida skies. Mike is looking forward to growing the Epic brand and continuing to create exciting content for Epic’s YouTube channel!