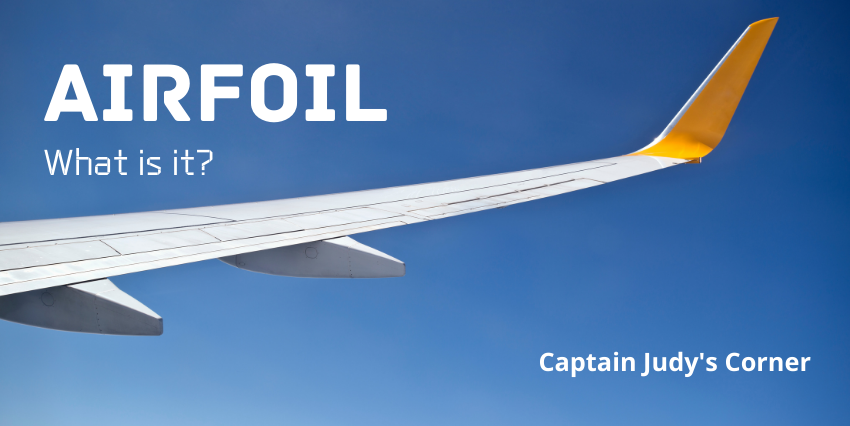 What is an airfoil?

The definition of an airfoil (or aerofoil in the UK) is a structure with curved surfaces, such as an airplane wing, fins, and horizontal stabilizer, designed to provide the best ratio of lift to drag during flight. The meaning of airfoil is the same for all aircraft.

Let’s consider the stubby, short wings of my Grumman compared to the long, flowing wings of the Epic Flight Academy’s Cessna 172SP. You may wonder how my little bird would have enough wing to leave Earth’s gravity. You can compare this to an egret flapping frantically to rise a few feet from the sand. Its tiny wings are capable of supporting what appears to be an oversized body. However, a hawk’s strong wings perform effortless, graceful maneuvers overhead.

As with birds, human flight must have both thrust and lift for flight. However, birds have an advantage over human flying machines with the capability of flapping their wings creating both lift and thrust collectively. From the beginning of human flight, we have unsuccessfully been capable of engineering a craft with flapping wings.

Aircraft create both lift and thrust in a different fashion than birds. Humans fly using engines, pushing and pulling the flying object through the air produced by thrust. This action creates air movement around the airfoils, which develops lift.

Wings are airfoils. The shape of a wing’s cross-section determines how well the air flows around the wing to generate lift. It’s actually quite simple to understand. In the late 1870s, Daniel Bernoulli discovered the differences in pressure that were later applied to airfoils.

When designing a flying machine, aircraft engineers must consider the machine’s mission. There is always a compromise of thrust, lift, drag, and weight. The greater the streamlined shape of an object, the less resistance moving through the air. This is known as air resistance and creates drag. The greater the drag, the more thrust must be produced to create lift in order for the object to move through the air.

To explore the concept of airfoil, you can familiarize yourself with these aviation terms and concepts:

The more an object weighs, the greater the effects of gravity. Gravity is always pulling the object back to the Earth, so more thrust and lift must be created. These four forces are always a continuous cycle that pilots control, regardless of the type of engineered machine they are flying. A pilot flying a machine not engineered for the specific mission must compensate with their knowledge and flying skills to accomplish the task. Mission-specific flying machines include: military, commercial, aerobatic, and training airplanes.

During the late 1920s and into the 1930s, the National Advisory Committee for Aeronautics (NACA) developed a series of 78 airfoil design cross sections. NACA then devised a four-digit numerical equation designation for each airfoil. This provides engineers with information for performance characteristics of a specific design. NACA shared this research with National Aeronautics and Space Administration (NASA). Whether you fly a Boeing, an Airbus, a Cessna, or a Grumman, the design will be one of these 78.

My spunky Grumman has a short 25’ wingspan, an inadequate engine for thrust resulting in limits on capabilities, and mediocre drag resistance.  This is because the Grumman was designed for quick responses through engineered features, such as short cables to each outside control surface and bonded metal (no rivets). Flying over long distances in this airplane requires more work, but it’s an extremely fun airplane to fly.

Epic’s Cessna 172s have a wingspan of 36 feet, adequate engine for thrust, and are aerodynamically designed to minimize drag. The engineers designed a well-balanced airplane. It is capable of withstanding the demands of flight training. Furthermore, its generous weight capacity and stable platform ensure it can fly long distances with fewer pilot demands.

Airplanes must move forward at higher speeds than a helicopter in order to generate air flow over the wings for the lift force. Helicopters require lift and thrust to overcome drag and weight. The pilot controls these four forces of flight with different design features. Helicopters have a big advantage over airplanes. This is because they are capable of hovering in one spot and moving sideways, as well as vertically. This machine generates lift with the air flow over the rotating main rotor blades.

Fighter jets are the most common example of supersonic aircraft. The aerodynamic designs of these aircraft are based on compressible flow. They can exceed the speed of sound. Most modern, high-speed passenger and military aircraft are powered by gas turbine engines. Compressible flow results when engineers compromise the four forces of flight with a goal to significantly lower drag. Pilots use a compressible flow calculator. One feature for lower drag is limiting wing span, which also reduces lift production. Greater thrust must therefore be produced. Engineers developed turbojets for greater thrust and increased fuel efficiencies. Basically, a compressor draws air into the engines pressurizing the air molecules, which is then routed at hundreds of miles per hour through a chamber that spins rotating blades.

Engineers have designed many types of flying machines to meet a pilot’s mission. They design aircraft parts with this in mind. Aviation maintenance technicians must also understand airfoils. These concepts are critical in their careers with companies such as Advanced Airfoil Components or PCC Airfoils in Wickcliffe, Ohio or Minerva, Ohio. As a safe pilot, your first mission must be to gain the knowledge and the skill required to fly. Choosing a stable airplane, such as the C172, and a quality flight training provider like Epic Flight Academy will assist you in this process. Students can even experience the concept of airfoil in a flight simulator.