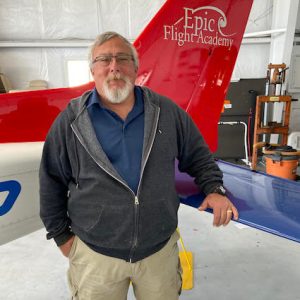 Dennis Hubbard began his aviation career with the United States Navy in 1977 maintaining and flying as a crew chief on the HH-46 helicopter accumulating over 3000 flight hours during his career. Before retiring from the Navy in 1996, he received his A&P certificate. He began his commercial experience with Trans State Airlines, working on J-41 aircraft in Alexandria, VA. He then transitioned to AirTran Airways working on DC-9, 737, 717 aircraft and 727 airframes both as a mechanic and shift leader. After 9 years with the commercial airlines, Dennis decided he missed working on helicopters and found employment with DynCorp aviation, where he deployed to Kabul Afghanistan in 2017 again working on the H-46.  He has recently returned to New Smyrna to join the Epic team. He is married to his wife Barbara and has a 24-year-old daughter who is a registered nurse at the Mayo Clinic in Rochester, Mn.