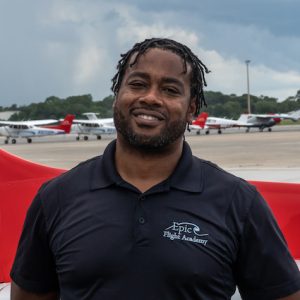 Tyren Wilson serves as Epic’s Business Operations Manager. He has worked at Epic Flight Academy since 2009. Tyren is originally from Cambridge, MD. He earned his Bachelor’s degree in Supervision and Management at Daytona State College while working at Epic.

Tyren is a former Navy sailor and a passionate Baltimore Ravens fan. While in the service, he had the privilege of visiting many countries, and when younger, he traveled to Germany often to visit his aunt. He left the military after four years and stayed in the south where he met his wife. They have two beautiful girls.