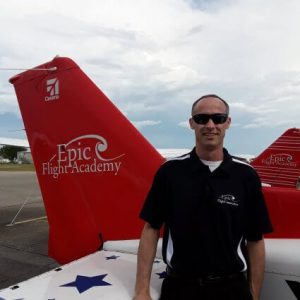 Department(s): Training Management/Course Leaders
Position: CPL Ground Instructor Course Leader
Rob Freit has been a part of the Epic team since November of 2009.  He started in the admissions department as an independent contractor, recruiting prospective students from all over the world and guiding them through the admissions process. Within a year he started working in the flight department, teaching both classroom and simulator lessons. He currently works full time with the flight department teaching the Commercial Ground Schools and Multi-Prep course.
His career in aviation started at Kent State University in Ohio where he discovered a love of flying. After his first flight in a Cessna 152 he was determined to become a professional pilot and decided to move to Florida to complete his degree with Embry-Riddle Aeronautical University. Shortly after graduating he was hired on as a flight instructor and then promoted to assistant training manager. After Embry-Riddle he was hired by Mesa Air Group where he flew regional jets all over North America.  Unfortunately, a medical issue prevented him from continuing as an airline pilot, so he left Mesa. After a few years working outside of aviation he found a spot with Epic and hasn’t looked back since.