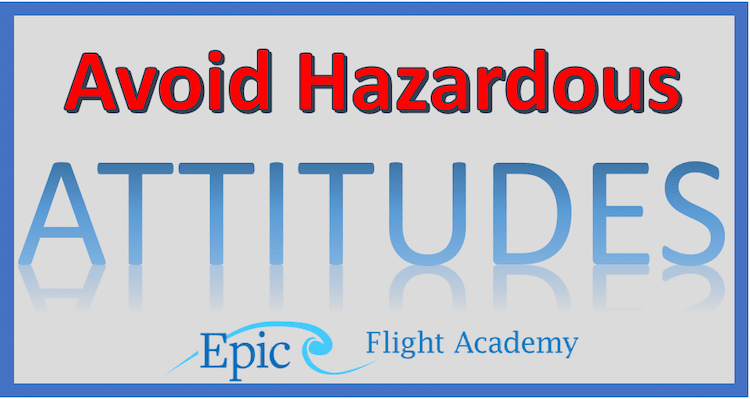 Is it important to verify checkpoints?

Hazardous flying attitudes can occur at any time. I knew myself fairly well when I started flying lessons at age 40. Or so I thought. The long solo cross-country was when I discovered what I did not know. During that flight, I had not properly timed or verified checkpoints resulting in becoming completely off-course.

My drive home from this particular flight provided reflection on how to be a better pilot. I’d replayed each skill set. I flew the airplane well and used the checklist regularly but was consistently lost. What surprised me was how many times I said to myself, “That check point is only slightly off course.”

I then recalled reading something about the five hazardous attitudes and recognized in order to progress, I needed to learn more.

Pilots should become aware of these hazardous attitudes and recognize ways to prevent these mindsets from occurring during flight.

How can pilots recognize hazardous attitudes?

The first step for a pilot is to recognize and identify their hazardous attitudes. A pilot should take some time after each flight to reflect not only on the practiced skills but also their attitude. Compare your thoughts and actions to each of the five hazardous attitudes identified by the FAA: Anti-Authority, Impulsive, Invulnerability, Macho, and Resignation. Once identifying the appropriate attitude, then memorize the antidote. As the attitude surfaces during a flight, the pilot states the antidote to counteract the attitude. A hazardous attitude can jeopardize the safety of a flight with the antidote making for a better, safer pilot.

What is an anti-authority attitude?

Pilots with an anti-authority attitude do not like being told what or how to do things. They tend to believe that the rules don’t apply to them. The pilot might not use checklists or perhaps disregard the advice of their instructor. This pilot might say or think, Why should I listen to you? The solution for this attitude would be for the pilot to tell themselves, Follow the rules, they are usually right!

What is an impulsive attitude?

Impulsive pilots act before thinking making decisions with little concern for the outcome. A few examples of impulsivity might be skipping a preflight or taking off on a cross country without checking the weather. An impulsive pilot may not consider all of the options before acting and could make a situation worse by not making the best decisions to meet the need. This pilot would often express, Do it quickly! The antidote for this pilot would be, Not so fast, think first!

What is an invulnerability attitude?

Invulnerability traits feel beyond harm. This could result in action without caution increasing the risk of an accident or error. This type of pilot might overlook issues, such as deteriorating weather or only slightly off course flying, telling themselves, It’s not that bad. To neutralize this hazardous attitude, the pilot should memorize, It could happen to me!

What is a macho attitude?

Macho attitude view themselves as the best pilot in the world imagining they can do anything. The macho pilot is very competitive and might exhibit risky behavior showing off skills. A macho type might fly too fast or too low, pushing the envelope in their quest to be the best. Their desire to be better than everyone can exceed aircraft and human boundaries with serious consequences. This hazardous attitude would believe, I can do this. The solution for this pilot, Taking chances is foolish!

What is a resignation attitude?

Resignation causes one to give up easily when faced with a challenge. A pilot with resignation thinks there is nothing he or she can do to change an outcome or resolve a problem. This pilot might give up in the middle of an emergency believing there is nothing that can be done. This is an especially hazardous flying attitude. The pilot will accept the undesired outcome instead of searching for solutions believing, What’s the use? The antidote would be, I am not helpless, I can make a difference!

After learning more about hazardous attitudes and the antidotes, my next cross-country was on course after having practiced stating the antidote, “It could happen to me!”

The National Transportation Safety Board (NTSB) reports that 80% of all aircraft accidents are the result of human error.

Hazardous attitudes can contribute to accidents related to human error. Identifying and neutralizing these attitudes can save a pilot from dangerous and emergency situations. Listen to the little voice inside your head. Which hazardous attitude do you hear? How will you remain safe and become a better pilot? Don’t let a bad attitude cost you your license or certificate.