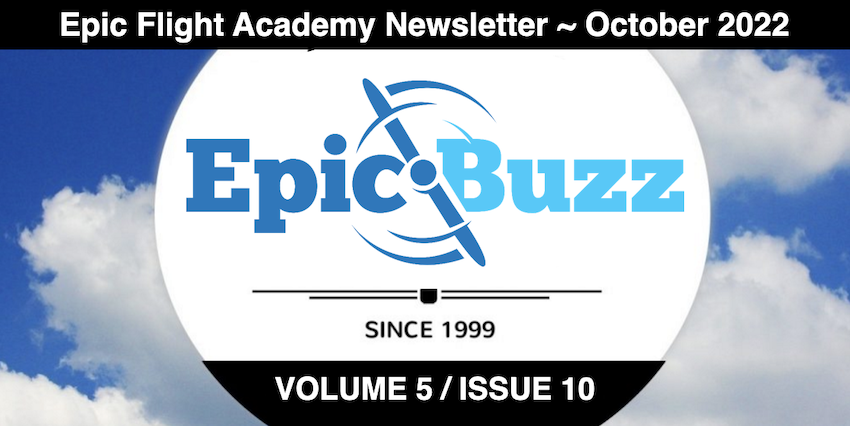 The Orlando Sentinel newspaper recognized Epic Flight Academy as a Top Workplace on Friday, September 16th at an awards ceremony in Orlando, Florida. Epic was recognized in the “Small Employer Group.” Founder and CEO Danny Perna said, “When we started in 1999, we never imagined the company would grow to multiple locations and more than 100 employees, but we’ve always been fortunate to hire great people. For our staff to weigh in on what it means to work at Epic meant so much. We value their feedback and hope to continue making Epic a great place to work.”

Congratulations to our latest graduates from Epic’s aircraft mechanic program! From left to right: Freeman Ip, Christopher Rooks, Kevin Griffin, and Amir Mazrach Farahani. Their 19 months of training have paid off, and they are off to begin new careers. We also welcomed our newest class of A&P students (below). Our next class begins January 30th. We invite you to apply.

Welcome to our newest Epic pilots who are already busy flight training. Our students come from all around the world and the U.S. We invite you to train at Epic!

Our thanks to GE (General Electric) and United Airlines for hosting career seminars at our Part 147 school. Aircraft mechanic students learned about exciting job opportunities at both companies.

Mark your calendar for our favorite event of the year! We will host a fishing tournament, scholarship event, and career fair on Saturday, November 5th. We are expecting more than a dozen aviation businesses and hope you’ll join us!

Are you and a friend thinking about attending flight school together? International flight students receive a special discount when they enroll with a friend. In October, we are offering our most popular special: “Bring a Friend to Flight School!” Both students will receive a $5,000 credit and free Private Pilot Ground School.

International students who enroll with a friend, with both paying their application fees between October 1, 2022 and October 31, 2022, are eligible for this special. You must enroll and begin training no later than January 1, 2023.

Congratulations to these amazing Epic graduates on their career accomplishments! We wish you all the best! Are you an Epic graduate? If so, send us an update.

We celebrated Girls in Aviation Day by inviting girls 18 and younger to visit Epic and celebrate with us. We also honored several of Epic’s own Women in Aviation: (L-R) Stephanie Babian (Epic staff), Neha Senuri Uduwarage (Epic flight student), Ashley Nagle (Epic aircraft mechanic student), and Michelle Beard (Epic flight instructor). Congratulations to these exemplary ladies for their dedication to aviation. We appreciate them so much!

Congratulations to these aircraft mechanics who passed FAA exams!

Congratulations to these flight students who passed check rides on their first attempt in September!