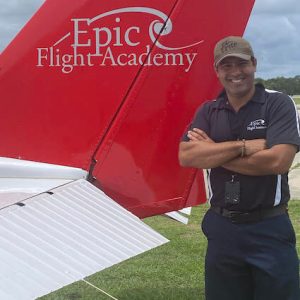 Vitor Assuncao comes from a varied background as a performer and from the trucking industry. In 2018 while on vacation at the Dominican Republic, he realized life needed to change. Upon deciding to pursue his passion as an aviator, he enrolled in flight school, but that was only the very beginning of his journey. He quickly understood that a good pilot is not just someone who flies an airline jet, but someone who is competent in their craft. With this belief he initiated his pursuit for a school with similar convictions. The goal was to find a school whose success was tied to his own. That is when his journey with Epic Flight Academy began. For over a year, Vitor excelled as a student in an environment that understands becoming a pilot is a process of development and that every detail matters.