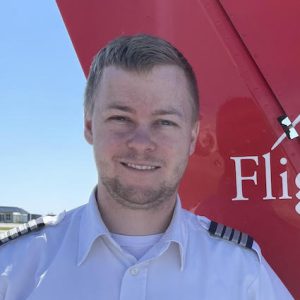 Tim was born in Griffin, Georgia and grew up in Greensboro, North Carolina. He is the third generation of his family to work in aviation, and as a result, developed a love of flying from an early age. He started his flight training while attending high school in Northern Ireland and finished his PPL after returning to the U.S. He then switched gears and went to school for his A&P license, later earning his Inspection Authorization. In his ten-year aviation career, he has worked in Flight Test at Honda Aircraft during certification of the HondaJet, built several experimental Lancair aircraft, and also worked as a lead mechanic doing heavy maintenance on FedEx’s Boeing 757s & 767s and A300s. He holds a B.S. in Aviation Maintenance Science from Embry-Riddle and earned his Instrument through CFII ratings here at Epic. When he’s not flying, he enjoys tinkering in his garage with his motorcycles and spending time outdoors.