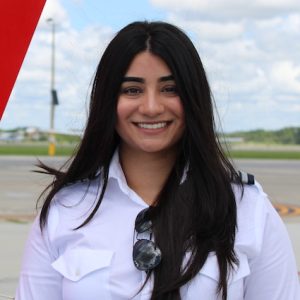 Born and raised outside of Seattle,Washington, Simer had no idea that aviation would be a career she would fall in love with. She is the first person in her family to have ever become a pilot. Growing up, Simer took an interest in all the different planes that would fly overhead but had no idea that as an adult she would pursue a career in aviation. Her love for this career came after she did a discovery flight for fun and soon realized she was on the right pathway for her future. After college, she started training in Seattle and earned her Private Pilot license and instrument rating before transferring to Epic Flight Academy. Since transferring to Epic, Simer confirms her pilot skills are the best they have ever been, and she looks forward to teaching the “Epic” way to the next generation of pilots.