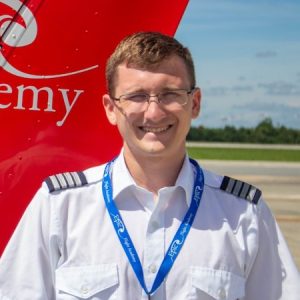 Schyler Sapinski is originally from South Glastonbury, Connecticut. He dreamed of becoming a pilot from an early age. That dream would start to become a reality after beginning his private pilot training in Connecticut. However, the winters would not be kind, and he had to then finish that training in Ormond Beach, Florida. From there, he attended Embry-Riddle Aeronautical University. Graduating with a degree in Aeronautical Science and wanting to become a certified flight instructor, he came to Epic for the quality of training known around the community.  Completing Epic’s CFI and CFII training and he ultimately joined their team as an instructor. In his spare time, he enjoys SCUBA diving, playing golf, and going to the beach.