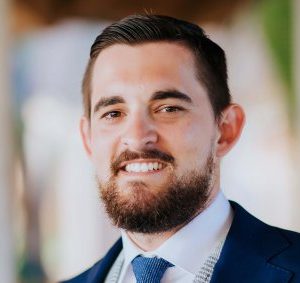 A native of New Smyrna Beach, Ross grew up within an earshot of the local airport. He likes to think it was the constant buzz overhead—and perhaps his mother’s fear of flying—that led to his interest in aviation. After graduating from New Smyrna Beach High School in 2007, Ross moved to Tampa to attend the University of South Florida. Upon completion of his bachelor’s degree, he moved to Birmingham, Alabama with his now-wife, Nicola Granger—another New Smyrna native, who was studying to become a Doctor of Optometry at the University of Alabama at Birmingham. The two spent a year in San Diego, California—where Nicola completed her residency at the La Jolla VA—before returning to New Smyrna Beach. Shortly after the move home, and with some gentle coaxing from his wife, Ross embarked on his journey to becoming a pilot. He completed his training in January of 2019 as a CFI, CFII, and MEI; and is thrilled to have the opportunity to grow and thrive in such an exciting career field.