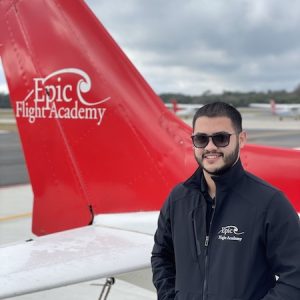 Omar is originally from Puerto Rico, where he got into aviation after a discovery flight on his 15th birthday and later decided to pursue his Private Pilot License in his senior year of high school. From there, he moved to Florida in 2017 and attended Embry-Riddle Aeronautical University and Epic Flight Academy at the same time. Omar graduated with a Bachelor’s of Science in Aeronautics and a minor in Business Administration, later pursuing a Master’s degree. Apart from this, he obtained all of his certificates starting from Instrument at Epic.