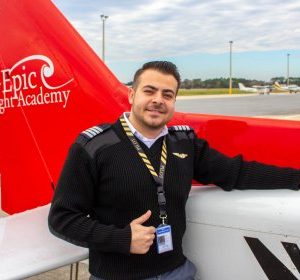 Department(s): Training Management/Course Leaders
Mo Al Ani is Epic’s Private Pilot Course Leader. After finishing high school in 2013, Mo decided to pursue his dream of becoming a professional airline pilot. His first footprint was Epic Flight Academy, where he earned all his pilot certificates from private pilot’s license through his CFI.  His love for aviation made him succeed in this  career choice. He’s the first person in his family to become a pilot. His parents are both Architectural Engineers. At 7 years old, he saw his first real B727 flight deck, and since that time he engaged himself in aviation. He still remembers when that captain gave him his hat, looked at him and said, “One day you’ll be a great pilot.” He is proud of what he has achieved and is willing to work harder because this is just the start, and as is well known, a good pilot never stops learning.