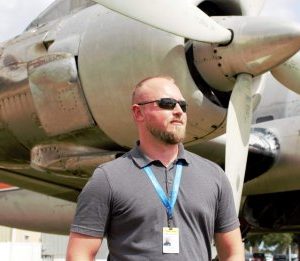 Department(s): IT
Michael Hawrylak is the Technology Coordinator here at Epic Flight Academy. He served in the United States Coast Guard from 2005 to 2010 as a Maritime Enforcement Specialist. After working Maritime Law Enforcement and Search and Rescue for so many years, Mike decided to pursue other interests. In 2011, he started flight training and began working in and out of the aviation industry. In 2016, he began working at Epic Flight Academy where his first project was to build a PA-44 Simulator for students to practice flows and procedures. That project went so well that he was hired full-time as Epic’s Technology Coordinator, and Epic Flight Academy’s IT department was born. Currently, Mike gets to work on a variety of technology projects, from building and certifying simulators, to networking and infrastructure work for the campus. He is very passionate about aviation and technology and enjoys what he does. Working at Epic gives him many opportunities to grow and to work in the industry that he loves with a company that truly cares about its students and its staff members.