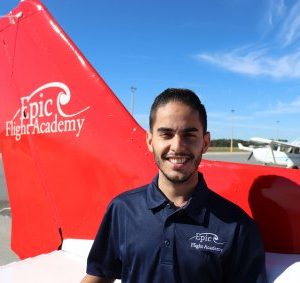 Luis Plaza graduated from Embry-Riddle Aeronautical University with a Bachelor of Science in Aeronautics in 2014. He began working for Epic Flight Academy in 2015 in the Admissions Department. He did a little bit of everything in Admissions from Student Services to Arrival Coordinator, and finally to a Senior Admissions Specialist. In 2018, he bought his first house in New Smyrna Beach and plans to continue his flight training at Epic. Being bilingual has helped Luis connect with different people around the world and made him a successful admissions specialist. He has traveled to Colombia, California, Panama, and Washington in 2016/2017 to recruit students. Speaking in front of crowds was always one of his biggest fears, but since he started this job, it has helped him forget about his fear by speaking to large groups of people. His final goal is to become a professional pilot for a U.S. Airline.