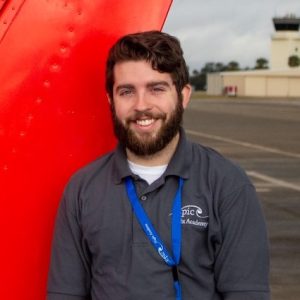 Jacob Dunaway is originally from Arkansas. He joined the Navy after high school in 2017. He was stationed in Norfolk, VA for 5 years until moving to Daytona for college. He is planning to follow in the footsteps of his grandfather and father. His grandfather was a crop duster in Mississippi, and his father had his private pilot license and flew on the side for fun. Jacob plans to graduate with a degree in Aeronautical Science from Embry-Riddle and eventually becoming a career pilot in the airlines. Other than aviation, he enjoys watching sports such as football and basketball. He also enjoys spending time with his wife and son.