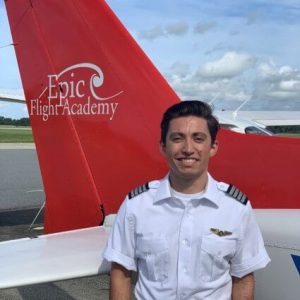 Colter was born and raised in Oxford, FL in Central Florida. His flight training began in high school where he earned his Private Pilot License. He began his degree and the rest of his flight training in 2016 at ERAU and will be graduating at the end of 2019. There he received his Instrument Rating and Commercial Single/Multi Engine Licenses. He earned his CFI rating at Epic. Colter is also an Ambassador for PSA Airlines’ Cadet Program at ERAU. He enjoys traveling and teaching and hopes to help many students in their aviation careers just like his instructors did before him.