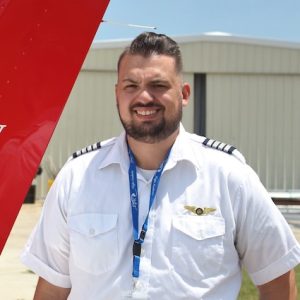 The story behind why Brendan Miller always wanted to become a pilot is quite simple. It began years ago in middle school when he originally dreamed about wanting to become an airline pilot. The thought of that stuck with him through high school, but when he made a decision on what to do after high school, he decided to head in a different direction. Six years and a few jobs later, he rediscovered his interest in aviation through playing Microsoft Flight Simulator. After doing some research, he decided it was finally time to pursue his childhood fantasy. So he set a course at Epic, acquired his certificates and ratings, became a flight instructor, and is on the path to his long forgotten dream.