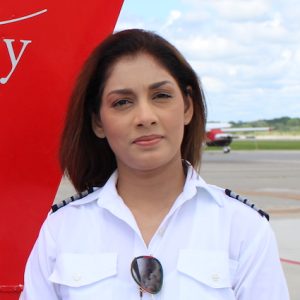 Anu earned her Private Pilot’s License in Wisconsin and earned her Instrument Rating, Commercial Single-Engine License, CFI, and CFII all here at Epic. She has also been a lead in operations with a major commercial airliner in the Asia-South region where she mentored cabin crew joiners in terms of safety procedures for Airbus A320 in-flight operations. This is where she developed a keen interest in avionics, which sparked the passion to become an airline pilot.

Anu had the opportunity to fly both in the extreme Wisconsin winters as well as the Florida heat and rain. She looks forward to passing on her knowledge effectively through her mentorship experience over to the Epic student pilots in the making.