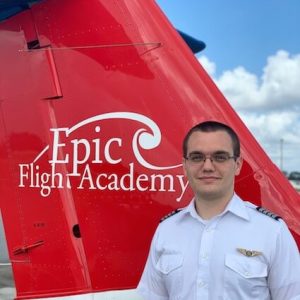 Alec was born in Westminster, Maryland and has lived in the surrounding area for his entire life. He is one of eight children, yet he is the only one to follow his father’s footsteps in becoming a pilot. While in his senior year of high school, Alec completed his private pilot training. In the fall of 2017, Alec started at Embry-Riddle Aeronautical University and earned his Instrument Rating and his Commercial Pilot Single-Engine Certificate (graduation December 2019). Alec began training at Epic Flight Academy in March of 2019 where he earned his Certified Flight Instructor certificate and Instrument Instructor add-on in August of 2019. After earning his flight hours, Alec plans to work for PSA Airlines so that he may flow through into American Airlines to follow after his father. His biggest passion is traveling the world as he has already been to over a dozen countries and he looks forward to continuing to travel when he works for a major airline.