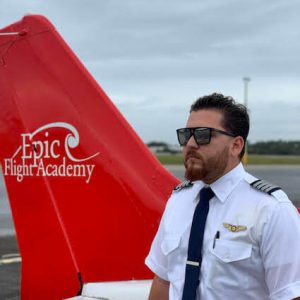 Alan Grisetti was born and raised in Paraguay and came to the United States when he was 12 years old. At the age of 22 he went on a flight with a high school friend of his in a Cessna-172 for the first time. His passion and obsession for aviation started that day, and a few weeks later he started his flight training in south Florida while working and traveling with the family construction business and attending college at the same time. In 2016, he decided to make aviation a full-time career as a professional pilot. He moved to the Daytona Beach area and has received all of his certificates and ratings at Epic Flight Academy where he is now a Certified Flight Instructor.