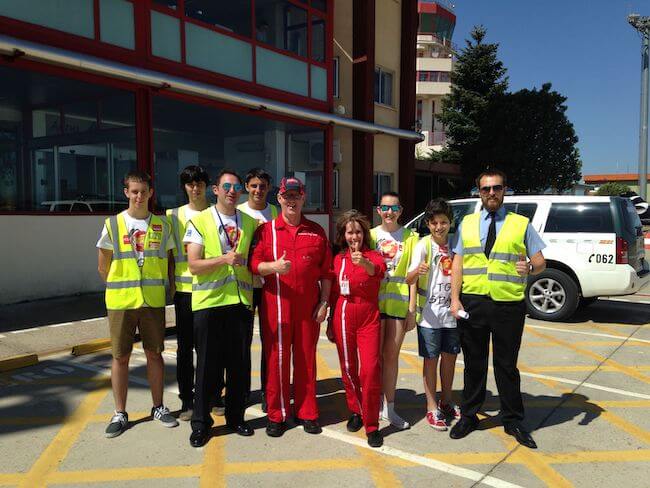 ATC approved our Instrument Flight Plan (IFR) as filed for the Citation jet. We were departing Le Bourget, France (LFPB). Our destination was Madrid-Cuatro Vientos airport (LECU). Once we crossed the Federal Information Region (FIR) boundary, ATC cleared us from FL320 (32000’ MSL) to 7000’ MSL. Next, they smoothly handed us over from the French airspace control to Spanish control.

Our descent took us over the Pyrenees mountains and two major rivers, the Ebro and Tagus. We saw Madrid from a distance, perched on a plateau of sand and clay. The breathtaking panorama revealed rivers weaving between the valleys and forests next to the brown mesa of Madrid.

Madrid was an extra special stop. Fly & Fun Flight School had participated on my world flight internet broadcasts for more than 5 years. We had all prepared for this day. For the first time, I was meeting these students in person along with the flight school owner, Julio de Zavala. What excitement when the Citation jet landed!

During these internet broadcasts, students connected from around the world. We shared aspects about aviation in our respective countries. Airspace was always a lofty topic. Spanish students discussed the classes of the International Civil Aviation Organization (ICAO) airspace. They explained that Classes A to E are controlled airspace, and Class F and G are uncontrolled.

In 1993, the United States implemented a slightly modified version of the ICAO classifications. The U.S. airspace includes 3 categories: controlled, uncontrolled, and special use airspace. In the United States, controlled airspace surrounds airports with a high volume of air traffic or above 18,000’ MSL. Uncontrolled airspace has no air traffic control (ATC) services.  Special use airspace (SUA) is designated according to security or safety having different levels of restrictions. The ICAO classifications further define these categories.

Uncontrolled airspace is designated as Class G with areas having low volume of air traffic. Most air traffic in Class G fly under Visual Flight Rules (VFR) rules. There are moderate required VFR weather minimums. Also there are no communication or air traffic control requirements. It is the pilot’s responsibility to see and avoid other traffic.

Class G (Golf), prior to 1993, known as Uncontrolled Airspace
There are 3 dimensions:

In the United States, some student pilots find airspace to be a difficult topic. However, it just takes a little effort to learn. During my world travels, students from other nations are often amazed at the freedom for flight in the U.S. Understanding airspace is small price to pay. After all, we enjoy greater opportunities to slip the surly bonds of Earth and dance the skies on laughter-silvered wing!