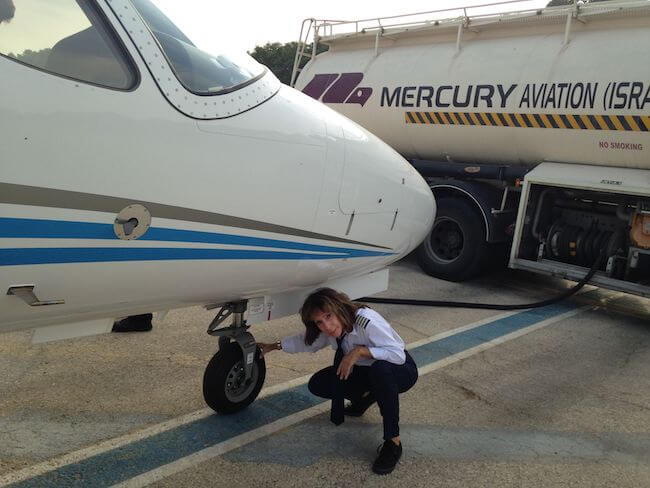 We filed the Citation jet’s route departing from Yerevan, Armenia (UDYZ) to Tel Aviv, Israel (LLBG). During our pre-briefing, ATC shared we would receive more information once airborne. In other words, we expected an assigned, mandatory security stop before being allowed into Israel airspace.

How are aircraft cleared for security before landing in Israel?

Israel assigns all aircraft a security landing airport before entry into their airspace. This is required. We were to land and provide proof of information for our aircraft, crew, and passengers. After that, they would provide a special security code. This code was specific to our aircraft. Therefore, it must be included when radioing Israeli air traffic control at the time of our requesting entry. If we did not include this special security code, then we would be denied entry into Israeli airspace.

Once airborne, ATC chose Larnaca, Cyprus (LCLK) as our required security landing airport. After that, we could enter Israeli airspace. Our assigned route change was complicated, and it required transition through Turkish airspace. Turkey and Cyprus were politically opposed, and therefore not on friendly terms. During this unrest, air traffic controllers could not share information about any arriving, departing, or transition flights through their airspace.

All aircraft entering or exiting a nation’s airspace must report before entering or exiting, including the U.S. These reporting points are called Federal Information Regions (FIR) or Air Defense Identification Zones (ADIZ). Aircraft flying into, out of, or through these airspaces must comply. This is due to security and airspace requirements in each country.

Are security clearances different from country to country?

Yes! Because of the conflict, we had to be extra vigilant before entering either Turkey or Cyprus airspace. Not reporting our positions could cause us severe consequences. Therefore, we prepared for radio silence nearing Turkey and Cyprus FIR boundaries. It was an awkward moment as we switched frequencies without ATC approval. We switched from Turkey’s control and announced our presence to Cyprus control. The controller welcomed us into Cyprus airspace where we landed without incident.

In Cyprus, armed security guards greeted us. They instructed us to remain in the Citation jet. The guards requested aircraft, crew, and passenger documents. Next, we were escorted to a small building where we entered a locked room with one computer. The guard instructed us to enter all our information onto this computer. He then stated that once our information was verified, the computer would generate 3 VERY IMPORTANT security questions. The guard further explained. Before we received permission to enter Israeli airspace, we must answer these same questions EXACTLY as entered on this computer. Additionally, we would have to enter our special security code.

How were security questions determined?

After entering all our documentation, we held our breath and prepared for the 3 questions. My first officer prepared to copy our answers and the special code. We hovered around the computer trying to guess what these VERY important questions could be.

We were amazed by the first question. “What is your favorite color?” (Really!?) The second and third questions had to be the serious questions, and this must be the trick question. However, the second question was, “What is your favorite food?” (Seriously?!) Certainly, the third question was going to be the hard one. And yet, the third was, “Name an important person in your life.” My first officer wrote down each answer on his kneeboard that we had agreed upon.

The guard escorted us back to the Citation jet, and after a pre-flight, ATC cleared us for departure. We were ready with our VERY important security answers and security code as we switched from Cyprus to Israeli controllers. Israeli controllers finally asked our security questions after a long wait, with almost twenty minutes of heading changes and reporting points.

My first officer answered when finally asked our three VERY important security questions and security code. Once Israeli controllers deemed we were not a security threat, their communications became friendly, always ending with “shalom,” meaning “peace.”

What if countries are politically opposed?

Politically opposed nations present challenges to pilots. Aircraft are limited or denied routing through the country. Pilots often face airspace embargoes, no-fly zones, or unpredicted changes to a FIR or ADIZ. Due to higher costs associate with circumventing blockades, commercial airlines may close. The military may dominate a nation’s airspace classifications and air traffic control system.

How has airspace been standardized?

Do countries change how the ICAO standards are used?

Yes. The the ICAO divided the world’s navigable airspace into three-dimensional segments. However, some countries chose a two-dimensional approach. They assigned each of these dimensional segments a specific class. Each class has its own rules and regulations. A country’s national aviation authority determines how to use ICAO classifications. For instance, some countries modify the rules to fit security, safety, or services that existed before the ICAO standardization.

So, are you wondering about the answers to those VERY important security questions? We each answered one question. First, I chose red as favorite color. Next, our first officer chose pita, his favorite food. Lastly, the relief pilot chose his wife, Valentina, as the important person.

Although experiencing numerous changes from the ICAO airspace standardization, it helped me safely navigate the globe.